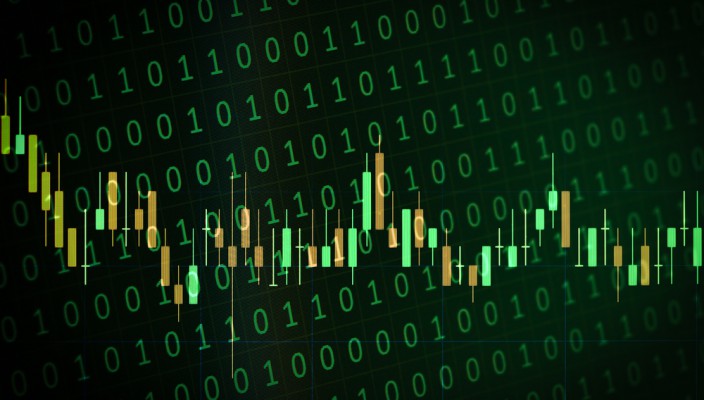 What are candlesticks on your chart? They’re simply an illustration of price movement. They’re not a language, and they’re not a code you have to decipher. They’re a representation of price, and there are many other tools you can use to illustrate where the price of a security like a forex currency pair is headed during any given moment in the market.

You could use bars instead of candlesticks, Renko blocks, point and figure, or a line. There are also versions of candlesticks which smooth out the information, such as Heikin Ashi candles.

Candlesticks develop patterns, and it’s inside these patterns where analysts and traders look for information and clues as to what price might do next. There are many patterns and single candlestick formations you may be familiar with; Doji, spinning top, inside-bar, engulfing (bearish and bullish), hammer.

Candlestick patterns are ancient technology. According to various reports, candlestick charts were developed in the 18th century by Munehisa Homma, a Japanese rice trader and commodities dealer. He used them as a simple graphical method to determine demand and supply.

As a by-product, candlestick patterns began to establish an overall market sentiment. Traders could identify market conditions and quickly adapt their buying and selling to the underlying levels of commerce.

Candlestick charting was introduced to the Western world by Steve Nison. His book, Japanese Candlestick Charting Techniques, was published in 1991. Like Mr Homma’s theory, the techniques were relatable to commodities and demand and supply.

Before Steve Nison’s Eureka publication traders used graphs or points and lines. Although these other representations appeared to be crude, they were practical and stood the test of time. We must remember that markets existed and were highly efficient before the birth of the internet.

Traders needed methods to translate what they saw on their charts and time frames into information they could understand. Based on their interpretation of the patterns, they could make trading decisions and act.

The basic mechanics of a candlestick

You have an open high, a low, and a close referred to as OHLC. Depending on how the candle’s body develops will reveal how bullish, bearish or indecisive traders are. If the candle is full, and has a short wick at the top of the candle, the interpretation is bullish market conditions.

When initially exposed to the theory, you might feel overwhelmed, but you quickly get to know there aren’t many patterns you need to identify to become proficient. Candlesticks are very visually appealing, and traders can engage in a crash course to learn the most popular candlestick-patterns and single candlestick formations. If you search on Google, you can find many short studies on the subject and get up to speed with the basics and patterns.

However, there is a danger that traders become absorbed and so invested in candlestick formations on their FX charts that they misinterpret the information and see patterns that are communicating very little information.

The biggest mistake is screening for patterns and then making decisions. For example, you might studiously search for an engulfing bullish candle on a 1hr time frame, find it and take the trade. But this decision based on this single candle formation might not be supported by any bullish evidence on the higher or lower time frames. The candlesticks must get combined with other timeframes, technical analysis and fundamental analysis because the theory fails to work in isolation.

It would be best if you also matched the patterns to your style of trading. If you day trade and see candlestick-patterns developing on your 1hr chart, arguably, these are strong indications, particularly during news events or when economic calendar data are published.

While candlesticks are valuable because you’re searching for price action, you can see this phenomenon developing just as quickly using a line indicator or using specific technical indicators. If price rises suddenly it’ll show on a line, the MACD, or a simple moving average crossover strategy. As a consideration, you could remove any price indication from your chart and only use indicators and still be able to trade effectively.

It’s essential to use all the tools at your disposal to determine where the security’s price is (probably) headed next. That probability factor is critical to your strategy because no chart analysis is perfect; you’ll still suffer false reading using candlesticks and execute trades that fail. Candlestick trading is not a magic success formula. Nothing underpins your success more than sticking to your strict money management rules and understanding the impact probability has on your trading outcomes.

« Sterling rises due to rumours of a Brexit agreement; US equity markets keep gains Investors and traders await approval of the Pandemic Relief Bill, while markets absorb the Brexit deal impact »