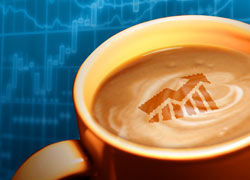 Your Morning Coffee And The Financial Markets

Singapore’s stock exchange approved Formula One’s plan to raise as much as USD3 bn in an initial public offering in the city-state. The people asked not to be identified because the information is private. Loh Wei Ling.

The disconnect between the Fed’s optimistic forecast for  expansion and its more bearish expectations for the labour market and inflation have made it difficult to predict the course of monetary  policy, according to Stanley, who said he underestimated central bankers? emphasis on their goal of full employment.

The Fed has left its benchmark federal funds rate near zero since December 2008 and in January extended its plan to keep the rate low from an earlier time frame of mid-2013. Chairman Ben S. Bernanke has also undertaken two rounds of asset purchases totalling USD2.3 ton and is scheduled to complete a program in June.

European stocks climbed, after the biggest weekly selloff for the Stoxx Europe 600 Index since September, as China’s pledge to boost growth helped offset concern over Greece’s possible exit from the euro area.

Group of Eight leaders on May 19 urged Greece to stay within the Euro area as polls in the country showed a close race between parties supporting and opposing austerity measures linked to the EU-led bailout.

The Nikkei 225 Stock Average rose from a four-month low as a weaker yen lifted the outlook for exporters and on speculation shares were oversold.

Gold up by 0.08% and the dollar  sliced, as on speculation that the Fed will be reluctant to buy more debt to shore up growth, easing concern that inflation will accelerate. Silver fell by 0.33% as STFs in New York and London sold precious metals to book profits.

Oil  up by 0.10% for the first time in two days as oil demand rose in the United States and the Federal Reserve said  its holding off on increasing monetary accommodation due to slow and improving economy. Copper gained 1.1% to the highest level in a week as the Chinese government seeks to spur its economy, and Germany pledged to consider growth measures for Europe, improving the outlook for metals.