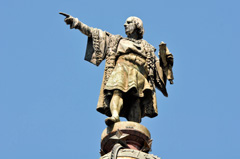 What Does Columbus Day and the Napoleon Complex Have in Common?

Oct 11 • Between the lines • 2277 Views • Comments Off on What Does Columbus Day and the Napoleon Complex Have in Common?

Napoleon complex is a term for describing an alleged type of inferiority complex said to affect men who are short in stature. The term is used more generally to describe people who are driven by a perceived handicap to overcompensate in other aspects of their lives.

In 2007, research by the University of Central Lancashire suggested that the Napoleon complex (described in terms of the theory that shorter men are more aggressive to dominate those who are taller than they are) may be a myth. The study discovered that short men (below 5’5″) were less likely to lose their temper than men of average height.

The experiment involved subjects dueling each other with sticks, with one subject deliberately rapping the other’s knuckles. Heart monitors revealed that the taller men were more likely to lose their tempers and hit back. University of Central Lancashire lecturer Dr Mike Eslea commented that “when people see a short man being aggressive, they are likely to think it is due to his size, simply because that attribute is obvious and grabs their attention.

Professor Abraham Buunk of the University of Groningen in the Netherlands found evidence of the small man syndrome. Researchers at the University found that men who were 5’4″ were 50% more likely to show signs of jealousy than men who were 6’6″. Sociological experiments have shown that there are several advantages to being tall in attracting a mate, and the small man syndrome is believed to be an evolutionary adaptation. – Credit Wikipedia.

President Sarkozy is 5′ 4″ and wears high heels (platforms) in public, make of that what you will, but credit where credit is due (no pun intended) the deflection away from the solvency issues French banks currently face has been a master stroke. Similarly the continual myopia regarding Greece, as opposed to where the real bodies are buried, is a lesson in media control that was never open to Napoleon.

As the markets have rallied massively on Monday we’ve all had to suspend disbelief. The mere mention of positive news in relation to the Eurozone debt crisis is enough, in the current climate, to propel the SPX to close up 3.4%. Not withstanding that the NFP data released on Friday, showing 100K jobs gain in September, has had many market commentators confidently predicting that the USA has now dodged the double dip recession bullet.

It was Columbus day in the USA on Monday, which partly explains the huge rise in the equities market based on such thin volume. However, those with longer memories, (a memory of more than the previous week appears to be the new norm in the investment community) will recall another Columbus day when stocks rallied and then plunged spectacularly, 2008. At least the Greeks weren’t paying 150% to borrow money for a year back in 2008, a figure that was reached today in the bond market. My iPad just accidentally typed ‘bong” market, instead of bond, you have to wonder which is the more apt description. A country in Europe is actually paying 150% to borrow money and Sarkozy and Merkel have the audacity to suggest that Greece will not be allowed to default, or was that last week’s plan and this week it’s an “orderly default” again? Has anyone checked out Merkel’s height, when not in her high heels? Oh, just to finish off the Columbus 2008 reference the market rallied by circa 11% to then crash 40% over the next four months.

As to the punchline to the article title, they’re both myths, Christopher Columbus did not “discover America” in the sense of identifying a new continent. Named “Governor of the Indies”, Columbus lived out his life believing he had discovered the route to India, not a “New World”. This is, in part, why it was named after Amerigo Vespucci in 1507, about one year after Columbus died. It was not until his third voyage in 1498 that Columbus set foot on the American continent, and he never set foot on any land currently belonging to the United States. The majority of landings Columbus had made on his four voyages, including the initial October 12, 1492 landing (the anniversary of which forms the basis of Columbus Day), were in the Caribbean Islands.

Back to Europe’s problems and the contagion is being blown in from an unpredictable different direction, Danish banks have cut off credit to business, A number of Danish banks continue to hold “vulnerable loans” on their books and face “large” write downs according to Denmark’s financial watchdog, the Financial Supervisory Authority. A 400-billion-krone liquidity line announced by the central bank last month won’t help banks that face solvency problems because of deteriorating asset quality, an official at Moody’s has apparently told Bloomberg.

Europe’s main markets had a a very positive day on Monday, the STOXX closed up 2.27%, the FTSE up 1.80%, the CAC up 2.13% and the DAX closed up 3.02%. Crude has traded at a two-week high on the basis of the European debt ‘pledge’ and the Euro has traded at close on a three week high as a consequence of news on the plan. Currently the FTSE daily index equity future is flat and the SPX future is down. Brent has sold off and is currently down $237 a barrel.

In an interesting move the Chinese authorities, via a SWF, have bought significant equity stakes in their four leading banks as the banks’ share price reached levels not witnessed since the global collapse.

Data releases to be mindful of in the London and European session include the following;

The National Institute of Economic and Social Research (monthly report) covers the UK GDP. An expanding GDP indicates a growing economy, which is generally beneficial for the financial markets. Growth that is too rapid will promote inflationary worries, however, that may influence the MPC to raise interest rates.

« How Long To Stay In Demo with Your FX broker Is Not The Only Consideration When Using Demo Accounts Brother, Can You Spare A Dime? »