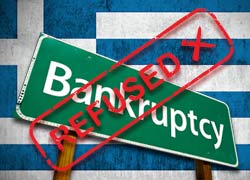 “We Refuse To Accept A Greek Bankruptcy. We Can’t Accept That.” – Angela Merkel

Feb 7 • Between the lines • 1684 Views • Comments Off on “We Refuse To Accept A Greek Bankruptcy. We Can’t Accept That.” – Angela Merkel

French President Nicolas Sarkozy met German Chancellor Angela Merkel in Paris on Monday as Greece’s interim prime minister, Lucas Papademos, prepared to negotiate with the troika of international lenders in Athens. However, the gathering of Greek political leaders was delayed until Tuesday as they struggled to create a united message.

Greece appears to be intent on taking the talks over a €130bn rescue programme for the country down to the wire tonight as officials announced that the discussions would be delayed. Greece is staring at the spectre of bankruptcy six weeks before it has to make bond repayments worth €14.5bn. EU officials expressed disbelief that politicians could not finally put their name to an accord that has taken so much time and effort to put together. The deadlock immediately raised fears that, three years into the crisis, Greece might finally be heading for the disorderly default international creditors, lead by Germany in the EU, have tried to avert.

I honestly can’t understand how additional days will help. Time is of the essence. A lot is at stake for the entire eurozone.

The postponement confirmed that ahead of general elections in April the talks have also been turned into a potential contest of brinkmanship within the Greek parliament. Greece’s decision makers are sensitive of the anger further austerity measures could create amongst a populace that has endured unprecedented belt-tightening, but seen very little in return, as Athens repeatedly misses its austerity fiscal targets. Greece’s politicians have attempted to put distance between themselves from any reforms which would be increasingly seen as counter-productive.

Powerful unionists, in both the public and private sector, have warned that the reaction to any agreement entailing further austerity would be “ferocious and possibly uncontrollable”. A general strike is scheduled for Tuesday with civil servants and workers stating they’ll also step up action later in the week.

We don’t care if they feel forced to accept such measures. The fact is 500,000 families are not even earning a euro a week and another million only have work sporadically. Greek people can’t take the burden of any more measures. If our politicians are foolish enough to agree to what our so-called saviours say, if they go ahead with yet more cuts and job losses, there will be an explosion. The reaction will be uncontrollable.

Market Overview
U.S. stocks fell after the S&P 500 posted a fifth weekly rally, the longest winning streak since January 2011. The S&P has risen 6.9 percent in 2012, the best annual start since 1987. U.S. and European equities fell consistently during both sessions, the Dow Jones Industrial Average closed down from an almost four-year high whilst the euro declined by the most in three weeks as Greek’s leaders wrestled with the spending cuts to get aid and avert a disorderly default.

Forex Spot-Lite
The Dollar Index, which IntercontinentalExchange Inc. uses to track the greenback against the currencies of six U.S. trading partners, climbed 0.1 percent to 79.036. The euro slid the most in a week versus the dollar and yen on concerns that Greece’s political leaders will fail to reach an agreement allowing the nation to receive a second bailout from international creditors. The 17-nation currency pared losses after German Chancellor Angela Merkel and French President Nicolas Sarkozy proposed setting up a separate account for Greek debt payments to reassure creditors.

The yen rose versus most major peers even after Bank of Japan Governor Masaaki Shirakawa said the nation’s economic condition is “severe” because of deflation and the strong currency. The central bank is implementing monetary easing measures and will take “appropriate steps as needed”, he stated in parliament in Tokyo today.

The Reserve Bank of Australia will lower the benchmark interest rate to 4 percent from 4.25 percent in a meeting tomorrow, another survey of economists shows. The Aussie lost 0.4 percent to $1.0726 and weakened 0.5 percent to 82.10 yen.

« Have You Ever Been 100% Certain Over A Forex Trade? The Euro Will Outlast Us All »