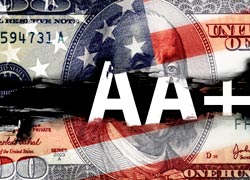 The USA raised it’s debt ceiling by $2.1 trillion on August 1st 2011, from $14.3 to $16.4trillion. It’s taken four months to ‘burn’ through $800 billion and on current trajectory, with a burn rate of circa $200 billion a month, the new ceiling raise will be breached in late April 2012, it will have taken the USA administration just nine months to maladminister $2.1 trillion in order to keep the plates spinning..

It’s only two weeks back that the USA breached the landmark $15 trillion debt figure. Today the USA is a further $100 billion in debt at $15.11 trillion to be precise, following the predicted $55 billion increase in debt with the settlement of all auctions from last week. Q3 GDP in current dollars is $15.18 trillion. US debt/GDP is now 99.5%, the highest it has been in the post WW2 period, and rising. The tipping point (to reach 100% debt versus GDP) is only $70 billion away, this is circa half of the next two weekly gross issuances of $160 billion over the next two weeks. By the time 2011 ends, the debt versus GDP of the USA will finally be the ominous triple digit number percentage.

Tomorrow is NFP day, many commentators are expecting a spectacularly good number to go hand in hand with so much positive news that’s been released this week regarding increased manufacturing, courtesy of stuffing inventory into retailers on a SOR basis (sale or return) and other better than expected confidence numbers, after all folk not confident of keeping their jobs don’t feel positive. However, the jobs data published on Thursday afternoon by the USA BLS was discouraging, the weekly rolling figure for new claimants remains at circa 400,000 per week above the anticipated 390,000. The predictions for tomorrow’s NFP figure range from 122K – 150K jobs created in November. It’s worth noting that many analysts suggest that the USA would have to create 250K jobs per month, over a sustained period of four years, to reach pre-recession levels of employment given the country had lost approximately ten million jobs since 2007.

Overview
The S&P 500 slipped 0.2 percent to close at 1,244.58 at 4 p.m. in New York following the spectacular 4.3 percent jump on Wednesday after six central banks took coordinated and unified action to ease funding strains stemming from turmoil in European bond markets. The yield on France’s 10-year note dropped 29 basis points, the most since 1991, to 3.11 percent. Spain’s five-year yield tumbled 57 basis points to 5.29 percent. The euro was up 0.1 percent at $1.3461, paring an earlier 0.6 percent advance.

A report showing U.S. manufacturing expanded at the fastest pace in five months and forecasts that data tomorrow will reveal a pickup in job growth failed to extend a three-day, 7.6 percent rally in the S&P 500. A contraction in China’s manufacturing fuelled concern Europe’s debt crisis is damaging the global economy as yesterday’s moves by central banks were viewed as only a temporary fix.

The new head of the European Central Bank signalled on Thursday that the ECB stood ready to act more aggressively to fight Europe’s debt crisis if political leaders agree next week on much tighter budget controls in the 17-nation euro zone.

A new fiscal compact would be the most important signal from euro area governments for embarking on a path of comprehensive deepening of economic integration. It would also present a clear trajectory for the future evolution of the euro area, thus framing expectations.

French borrowing costs declined in an auction of 10-year bonds and Spain sold 3.75 billion euros ($5.1 billion) of debt, the maximum amount planned. France sold 1.57 billion euros of 10-year debt at an average yield of 3.18 percent, down from 3.22 percent at the last auction on Nov. 3. The yield on Spain’s five-year bonds was 5.544 percent, compared with 4.848 percent when notes with a similar maturity were auctioned on Nov. 3.

The dollar strengthened against eight of 16 major peers, while the euro increased against nine. The Australian currency dropped versus 15 of 16 major peers after building approvals dropped in October and consumer spending slowed.

Economic data releases that may affect the morning session sentiment

Economists polled by Bloomberg gave a median forecast of 52 for UK PMI construction numbers, compared with last month’s index level of 53.9. In the producer price index a survey of analysts compiled by Bloomberg shows a predicted month-on-month change of 0.2%, compared with the 0.3% that was reported in last month’s release. The same survey gave a median forecast of 5.6% year-on-year (the previous month’s annualised rate was 5.8.