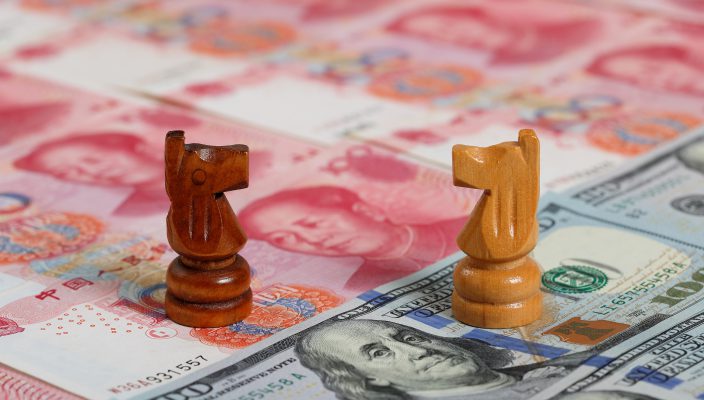 Chinese officials have remained conspicuously silent and dignified, during the social media onslaught the country has experienced from President Trump, over recent weekends. Trump took to his preferred method of communication (Twitter) on Sunday, to once again threaten China’s economy, with increased tariffs of 25%, on all Chinese imports into the USA. Chinese officials finally broke their silence to list a series of USA imports that would endure reciprocal tariffs. Analysts, traders and investors took this final retaliation as evidence that there is little expectation for a compromise and consensus to be reached, over the short term. Therefore, market participants are beginning to price in the damage a trade war will cost, on the basis that no one wins in a trade war.

Chinese equity markets sold off sharply during the Asian session on Monday morning, the risk off mood then extended to the European session, as the U.K. FTSE 100, German DAX and France’s CAC sold off at the market open, eventually closing down: -0.55%, -1.52 and -1.22% respectively. By 20:00pm U.K. time USA market indices had slumped alarmingly, SPX down -2.33% and the NASDAQ down -2.79%. The NASDAQ has fallen from a circa 22%+ gain in 2019 YTD, to approx. 16.2% during the past fortnight, as the Chinese trade issues have caused a reversal in equity market sentiment. FAANG tech stocks took a battering, with Apple trading down over -5% at one stage, whilst new listing Uber fell by as much as -12%, marking a circa -17% fall from its open price of $45.00 on Friday, that was set at the lower end of the value/expectation, deliberately to avoid such an early collapse.

Commodities experienced mixed fortunes during the trading sessions, WTI oil whipsawed in a wide range, oscillating between initial bullish and bearish conditions, towards the end of the day’s trading session. WTI broke up through the $63.00 a barrel handle as price breached R3, before surrendering the gains, to fall to S3 and a price of 61.07 during the later stage of the New York session, after printing a daily low of 60.79. Gold rose during the day’s trading sessions, as its safe haven appeal increased; at 20:30pm XAU/USD traded up 1.11% breaching the three levels of resistance, as price breached the 1,300 handle, for the first time since April 12-13th.

In a classic, text book, illustration of risk off trading, yen attracted save haven bids from investors looking for refuge from falling markets, particularly from the slumping Asian equity markets. JPY recorded significant gains on the day versus all its major peers, especially: GBP, EUR, CHF, AUD and USD. The major pair USD/JPY continued its recent fall, maintaining position below the 110.0 handle at 109.23 down -0.57%, a low not printed since early February, as price fell to S3, before recovering marginally towards the end of the New York trading session.

Similar patterns of yen price action was experienced by all currencies, were JPY was the counter currency of the pair. The Swiss franc also attracted safe haven investing, at 20:45pm U.K. time EUR/CHF traded down -0.54% at 1.130, as the bearish price action saw price crash through the three levels of support. USD/CHF experienced a similar pattern of price action behaviour, falling by -0.52% to reach 1.006, trading down -1.13% weekly, as the appeal of the Swissie has increased over the past trading week.

GBP/USD traded at 1.296 at 21:00pm, down -0.27% on the day, after initially trading in positive territory during the early stages of the London-European session. The major currency pair referred to as “cable”, reversed direction violently before the New York open, eventually falling through the second level of support, S2, during the latter part of the New York trading session. The reason for the fall was partly due to hopes fading that the U.K. Parliament would reach a consensus regarding the Brexit withdrawal agreement on offer from the European Union. Institutional level FX traders must be reaching a tensile breaking point of patience, regarding their valuation of sterling pairs, based on the current situation.

Apparently, according to political commentators; prime minister May is adamant in her desire to return to Brussels to ask for a revised agreement, she also intends to bring back the WA for a fourth meaningful vote, she refuses to countenance resigning, despite Tory party polling falling to multi year lows and fellow ministers lining up to politely backstab her, at every opportunity. Analysts may be asking the wider question; “who’s currently governing Britain?” given the current chaotic situation. Moreover, such a situation cannot possibly encourage confidence in GBP, or U.K. equity markets.

On Tuesday morning at 9:30am the economic calendar will focus on the latest: U.K. employment, unemployment and wage data. As is the norm, the unemployment figure is expected to remain low with employment remaining high and wage increases are predicted to come in ahead of inflation. However, the data fails to reveal some of the issues surrounding the scourge of low pay and insecure work in the U.K.

Thereafter, attention turns to the Eurozone at 10:00am, as the latest ZEW survey readings are published for Germany and the wider Eurozone. Reuters are forecasting an improvement in all three metrics, which could have a positive impact on the value of the euro. At 13:30pm, as New York readies to open, a series of data, relating to USA import and export prices, will be published. Interest in this data will increase next month, if imports and exports increase in cost, due to the Chinese and European trade tariffs, the USA administration intends to apply on goods currently in transit.

« Can the trend still be your friend, on several time frames? USA market indices futures rise, as analysts target a meeting, between Trump and Xi Jinping at June’s G20 summit, as a potential solution to the tariff war, USD rises versus peers. »