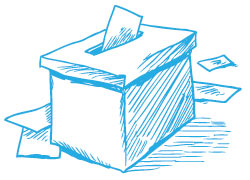 Threaten the Markets with Democracy and a Collapse Ensues

There is a sub text to the threatened Papa G referendum that’s been missed by the mainstream media and it’s not the obvious fact that he’s actually an American and may have another agenda. He was born George Papandreou in 1952 in Saint Paul, Minnesota, United States and didn’t repatriate to Greece until 1974. George Papandreou came to Greece after the restoration of Greek democracy in 1974. His father was a previous prime minister of Greece and his grandfather was elected three times to the post so being a cute operator, despite the traces of nepotism in certain posts he occupied, is hard wired into his DNA.

No, the subtext is that one of the most crucial decisions that could be made for Greece since WW II can’t be made by the little people, no siree, only the ‘big brains’ can make these decisions. These are the very same big brains that got Greece and the Eurozone into this calamitous mess originally.

The little people can’t be permitted to have any input in signing off; mass unemployment, decades of austerity, savage social cuts, no pensions and their investments further trashed, they simply get to shrug their shoulders when faced with debt slavery and ask “how high Sir?” when told to jump in order to protect the interests of the banking and political elite. The further irony that the markets began a revised collapse, when faced with the prospect of democracy in action, should not be lost on European citizens. If ever a glaring example was needed, of just how far the system has de-coupled from the interests of the majority, then Tuesday’s trading sessions have certainly provided it.

Apparently the Merkozy siamese alliance is not best pleased, they had mistakenly believed ordinary Greeks should leap for joy at the prospect of 50% haircuts on bond debts that are swapped amongst the banking elite and change hands at up to 200% interest. Well they (the Greeks) get to continue using the euro, what’s not to like?

Sarkozy told reporters in Paris that the referendum proposal;

surprised all of Europe. The plan adopted unanimously by the 17 members of the euro area last Thursday is the only possible way to resolve the problem of Greek debt.

Fitch Ratings said in a statement on Tuesday that;

a rejection of the aid plan would increase the risk of a forced and disorderly sovereign default and raises the chance of Greece leaving the euro.

I think it’s good, because you can’t keep carrying out policies against the will of the people, it won’t work. In Greece and in Germany we are making the mistake of not consulting the population enough in this process. I fear that the Greek people will speak out against these measures because they haven’t been consulted, which will mean the collapse of this debt bailout logic.

The majority of the 1,009 Greek’s surveyed on Oct. 27, the very day the new bailout package was announced and agreed in principle, said the accord should be put to a referendum, according to the results of a Kapa Research SA poll, published in the Greek To Vima newspaper. Forty-six percent said they’d oppose the plan at such a referendum. In the same poll, more than seven in 10 favoured Greece remaining in the euro.

Greece will proceed with a referendum on the European Union’s financing package and Prime Minister George Papandreou will win a vote of confidence in Parliament this week, according to the government spokesman Angelos Tolkas. Investors are concerned that a failed referendum will spark a default where bondholders get paid less than what is on offer under the terms of current bailout agreements, a complete default could see banks and investors receiving nothing.

Manufacturing in the U.S. was close to stagnation in October as cooling global demand prompted factories to curtail production and reduce their stock inventories. The Institute for Supply Management’s factory index dropped to 50.8 last month from 51.6 in September, the group’s data showed on Tuesday. A reading of 52 was the median forecast in a Bloomberg News survey of economists. Fifty is the normally accepted dividing line between growth and contraction.

Morgan Stanley fell up to 12 percent in New York trading on Tuesday, leading financial stocks lower on concerns that a Greek referendum on Europe’s bailout plan will worsen the region’s debt crisis. Morgan Stanley has dropped 14 percent in the past two trading days. Shares of the New York-based firm rallied 27 percent during the previous two weeks, the bank finally closed down $1.11, (6.3 percent), to $16.53 at 10:37 a.m., the biggest decline in the Standard & Poor’s 500 Financials Index, which slid 2.3 percent. Citigroup Inc. fell 4.3 percent and JPMorgan Chase & Co. decreased 4.1 percent.

Markets
Equities sank in both trading sessions on Tuesday as the euro weakened, a surge in German bunds sent yields down the most on record, amid concern Europe’s bailout of Greece will unravel. The dollar and U.S. Treasuries rallied. The MSCI All-Country World Index fell 3.4 percent at 4 p.m. in New York as indices in Italy, France and Germany plunged at least 5 percent. The Standard & Poor’s 500 Index lost 2.8 percent. German 10-year yields fell up to 29 basis points to 1.73 percent. Rates on 10-year Italian and French debt touched euro-era records above German debt. The euro fell 1.2 percent to $1.3686. Copper and oil paced losses in commodities after China’s manufacturing growth cooled.

Oil fell for a third day amid concern that Europe’s plan to bail out Greece will completely unravel if the country conducts its referendum, Brent oil for December settlement dropped 2 cents to end the session at $109.54 a barrel on the London-based ICE Futures Europe exchange. The difference between Nymex crude and Brent widened to $17.35 today. The European benchmark traded at a $16.37 premium yesterday, the least since June 28.

Oil output in the Organisation of Petroleum Exporting Countries (OPEC) rose in October to the highest level in almost three years, gains in Libya and Angola outpaced a Saudi cut, a Bloomberg News survey showed yesterday. Production increased 0.4 percent to average 30.1 million barrels a day, the most since November 2008.

Economic calendar events that may affect the morning session sentiment

Eurozone PMI is expected to remain unchanged. A Bloomberg survey yielded a median estimate of 47.3 unchanged from the previous figure.