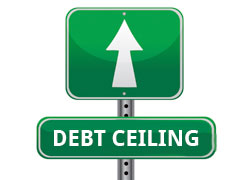 The USA Raises Its Debt Ceiling To $16.4 Trillion As It Burns Through Over $1 Trillion Inside 6 Months

Jan 27 • Between the lines • 4360 Views • Comments Off on The USA Raises Its Debt Ceiling To $16.4 Trillion As It Burns Through Over $1 Trillion Inside 6 Months

As the Dow index reached a level in the afternoon/evening session not seen since post 2008 a less optimistic economic figure and barometer was reached. The USA government ‘process’ agreed to raise its debt ceiling.

The U.S. Senate failed to reject a bid to stop the debt ceiling hike on Thursday evening. The US now has $16.4 trillion in debt ‘capacity’ as of Friday. Approximately $100 billion was plundered from federal pension schemes over the past month in order to meet obligations and avoid a default, or further downgrade by the ratings agencies. The US will have circa $15.4 trillion in debt on Monday, a spend of circa $1.1 trillion since August. How long will the remaining circa $1.2-1.3 trillion in debt capacity last? At $125 billion/month it’s unlikely, on the current projections, that the ceiling raise will be enough to carry the USA past the November deadline without another massive debt ceiling debate and debacle.

How the policy makers and shapers will sell a burn rate of $2.4 trillion to the public, so close to their Presidential election, will be fascinating to observe. Whilst market commentators remain convinced that USA inflation is under control it’s becoming increasingly difficult to calculate and postulate how the USA can get begin to get ‘ahead of the curve’ and rein in what appears to be an out of control forest fire of debt.

The promise of cut backs, in order to control the public debt, was part of the legislation that permitted the original debt ceiling to be raised back in August 2011. If the USA burns through circa $2.4 trillion inside a calendar year then the cut backs are either not deep enough or wide ranging enough or alternatively the blunt policy is deeply flawed..

Greece Agreement
After weeks of wrangling over the coupon, (interest rate), Greece must pay on new bonds it will swap for existing debt, attention has shifted to whether or not the ECB and other public creditors will follow private bondholders in taking on board some of the losses.

A day after the International Monetary Fund chief Christine Lagarde said the ECB may need to accept losses on its Greek holdings, the European Union’s top economic official also warned more public money will be needed to make up a shortfall in the country’s second bailout. The ECB had previously ruled out taking voluntary losses on its Greek bond holdings but is now debating how it would handle any forced losses and whether to explore legal options to avoid such a hit.

Economic and Monetary Affairs Commissioner Olli Rehn told Reuters that euro zone governments and EU institutions would need to make up the difference so that Greece’s public debt can be reduced to close to 120 percent of annual output by 2020.

In fact, we’re quite close to a deal between the Greek government and the private sector community. I would expect it will be concluded in the coming days, preferably still in January, not February. We are preparing a package which will pave the way for a sustainable solution for Greece, and in that package, yes, on the basis of the revised debt sustainability analysis, there is likely to be some increased need of official sector funding, but not anything dramatic.

A debt deal must be clinched a month before 14.5 billion euros of bond redemptions fall due on March 20th, in just over three weeks. If a deal is not reached by then, Greece could sink into an uncontrolled default, triggering a banking crisis spreading contagion throughout the euro zone, although the ECB’s creation of nearly half a trillion euros of three-year money lent at 1% for the banks in December has to a large degree tempered that fear.

The S&P 500 has risen 4.8 percent so far this year, poised for the best January since it gained 6.1 percent during the first month of 1997, according to data compiled by Bloomberg.

The S&P 500’s best January rally since 1997 has pushed a pair of momentum and sentiment gauges to levels seen only 6 percent of the time since 1993, a sign the market is due for a pullback.

The Chicago Board Options Exchange Volatility Index, the gauge known as the VIX, fell below 20 for the first time since July on Jan. 19. The last time RSI exceeded 70 while the VIX stayed below 20, 11 months ago, the S&P 500 reached a 32-month high before dropping 6.4 percent over the next month, data compiled by Bloomberg showed. The VIX is the benchmark gauge of S&P 500 options prices.

« If Helicopter Ben Flies Again We Needn't Fear Hyper Inflation So What Kind Of Person Makes A Success Of Forex Trading? »