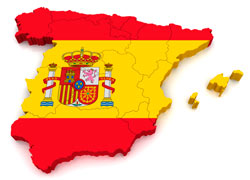 The Pain In Spain Stops Falling…In The Main

The big Euro news on Wednesday is that the ECB will take the unprecedented step of offering “unlimited” euro zone banks loans of up to 3 years on December 21st at a rate of around 1 percent in a move that should theoretically ward off a credit crunch that would arrest the currency bloc’s economy. As a consequence demand for the ECB’s one-week funds was relatively subdued on Tuesday as banks began to position themselves for its three-year loan operation.

The central bank on Tuesday invited lenders in the euro region to place orders for its first tranche of unlimited three-year loans, an attempt to keep credit flowing to the 17-nation economy. Results will be announced tomorrow. The ECB will lend banks as much as they ask for and has widened the pool of collateral they can use to secure the funds. ECB President Mario Draghi announced the plan to offer lenders unlimited funds for three years after the central bank’s policy meeting on Dec. 8.

Economists expect the ECB to lend 293 billion euros to banks in Wednesday’s tender, according to the median of 14 estimates in a Bloomberg News survey. ECB Vice President Vitor Constancio yesterday predicted “significant” demand for the loans.

Spanish bond yields tumbled on Tuesday from their previous recent euro-era highs since the ECB announcement, traders using prospects of a large take-up at the 3-year tender to square short positions before the end of the year. In fact shorter term financing costs for Spain more than halved on Tuesday as banks soaked up the debt at auction much of the purchasing power coming from cut-rate money which will be lent by the European Central Bank. Demand for the 3 and 6 month Spanish Treasury bills was strong, more than 18 billion euros offered/5.6 billion euros sold, considerably above the initial target of 3.5 billion to 4.5 billion euros.

Economists believe Spain is deeply into a second recession over the past three years, the laggard economy and high deficit putting it at the heart of the crisis. If Spain required a bailout together with Greece and potentially Italy it would stretch the available funds and the euro wide political will to fix the problem.

Rating agency Fitch stated that a comprehensive solution to the euro zone debt crisis is in fact beyond the region’s reach whilst it warned six of its economies, including Italy and Spain, that they could receive credit downgrades, perhaps in the first months of 2012.

However, the prudence by Spain’s outgoing Socialists combined with the promise of further cuts by the incoming centre-right government eased market worries and drew a line between its situation and the euro zone’s third largest economy Italy. Spain has room to manoeuvre, its debt redemptions begin in April whilst Italy faces payments of circa 100 billion euros in the first four months of 2012.

The German Ifo institute’s business climate index, based on a survey of 7,000 executives, increased to 107.2 from 106.6 in November, the Munich-based institute said. Economists had expected a drop to 106, the median forecast of 36 economists in a Bloomberg survey showed.

Oil for January delivery climbed 3.6 percent to $97.22 a barrel as the U.S. housing data bolstered optimism in the economy and speculation grew that further sanctions against Iran will curb supply. The GSCI index jumped 2.5 percent, as Brent crude, heating oil, cocoa, aluminum and gasoline climbed more than 2 percent.

The euro strengthened 0.6 percent to $1.3079. Australia’s dollar climbed 1.8 percent against the dollar after minutes of the central bank’s last meeting showed policy makers saw a continued expansion in the domestic economy even as Europe’s debt crisis weighs on global economic growth.

Sweden’s krona appreciated against the dollar and the euro even as the nation’s central bank lowered its main rate for the first time since 2009 to protect the economy from the debt crisis.

The current state of the UK public finances will be revealed tomorrow. A survey conducted by Bloomberg shows projections of £10.3 billion, against the previous reading of -£0.6 billion. For net borrowing a Bloomberg survey of analysts predicted a figure of £16.6 billion, compared with £3.4 billion the previous month.

« Confidence Is Contagious. So Is Lack Of Confidence The Gold Diggers Song – We're In The Money »