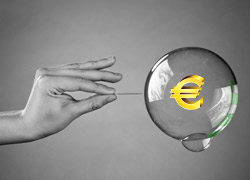 Is it irony or coincidence that as we welcome our seventh billionth global citizen into our world global unemployment reaches 200 million according to the ILO. The International Labor Organization said in its report that about 80 million net new jobs will be needed over the next two years to return to pre crisis employment rates—27 million in advanced economies and the remainder in emerging and developing countries. The projection is that only 40 million will be created.

“We have a brief window of opportunity to avoid a major double-dip in employment,” said Raymond Torres, director of the ILO International Institute for Labor Studies, which issued the report.

The risk of social unrest is rising in 45 of the 118 countries it examined—particularly within the European Union and Arab region, the ILO warned. Data released on Monday showed the number of people out of work in the euro zone rose to 16.2 million in September, the highest level since records began in 1998. The ILO said the number of jobless across the world has also hit a record high of more than 200 million.

Ahead of the G20 meeting to be held later this week in Cannes, France the OECD has spoilt the party and pricked the euphoric bubble of last week before the officials have even gathered and got into full debating swing. The OECD said economic growth in the eurozone will slow to 0.3pc next year after 1.6pc growth this year, and will remain weak in the US as emerging markets will experience slower growth than before the financial crisis began. Overall, growth in the G20 nations will slow to 3.8pc in 2012, compared to 3.9pc this year, it could accelerate to 4.6pc in 2013. The OECD added that the scenario will be worse if the eurozone rescue deal fails to restore confidence. The OECD said the U.S. economy will grow 1.8% next year, less than the 3.1% expansion it had forecast in May, and will pick up speed only in 2013, with a 2.5% expansion. Debt-to-GDP ratios will keep rising, reaching in two year’s time 108.7% in the U.S., 97.6% in the euro zone and 227.6% in Japan, the OECD figures showed.

A repeat of the financial crisis of 2007 could wipe up to 5 percent off major economies’ GDP by the first half of 2013, the OECD added. However, a radical action plan by the G20 could help boost growth above its projections. G20 nations need to make structural reforms to address unemployment and rebalance global demand, while interest rates in the eurozone should be lowered under new president Mario Draghi, the OECD added.

Whilst most eyes have been focused on the equity market rally since last week’s announcement of a solution (of sorts) to the Eurozone sovereign debt crisis the euro hasn’t played along having now lost close on all of it’s post solution announcement rally gains. The currency has now erased all of the gains, close on 400 pips versus the USA dollar since late last week. As night follows day the other PIIGS nations, in the best ‘Oliver Twist’ fashion, are politely asking “please Sir, can I have more?” Having witnessed Greece obtain fifty percent debt haircuts they now feel empowered to ask why they should toil and sweat to maintain the onerous and punishing austerity commitments they’ve all agreed to over the past twelve months.

What a clever grey old fox Greece’s prime minister is proving to be, no sooner is the ink dry on the overall deal and he suggests a national referendum on the austerity package, hat doffed, that’s world class ‘stiffing’, but he’s had some exclusive tutors and a helluva education over the past three years. Papandreou also said he would ask for a vote of confidence to secure support for his policy for the rest of his four-year term, which expires in 2013. Analysts said he was likely to win that, despite dissent among his parliamentary team. He was forced to expel a senior party member for voting against part of his latest austerity package and others warned him it was the last time they would vote for measures they did not believe in.

Prime Minister Silvio Berlusconi faced fresh calls to resign on Monday as markets finally began to turn on Italy, pushing its borrowing costs to dangerous new levels on renewed concern about a worsening of the euro zone crisis. Yields on Italy’s 10-year, fixed-rate bonds known as BTPs rose to 6.1 percent, a level widely seen as unsustainable in the longer term and close to the level which forced Rome to seek help from the European Central Bank in August. The ECB kept up its intervention to cap Rome’s borrowing costs by buying Italian bonds on the market on Monday but the risk premium continued to rise and 10-year Italian yields ended the day more than 407 basis points above benchmark German Bunds.

The jump in the yield reflected widening market concern about measures EU leaders agreed last week to stem the euro zone crisis and underlined Italy’s position at the centre of the emergency. Last week, Italy paid a yield of 6.06 percent at an auction of 10-year bonds, the highest since the launch of the euro more than a decade ago, fuelling growing concern about how it will fund the more than 600 billion euros of bonds it needs to refinance over the coming three years. Italy, the euro zone’s third largest economy, would be too big for euro zone authorities to bail out and EU leaders have been pressing Berlusconi for rapid and far-reaching reforms to cut the deficit and boost growth.

Euro zone inflation was surprisingly high at 3.0 percent for a second straight month in October, the EU announced on Monday, prompting economists to postpone their bets for a central bank rate cut until December. Efforts to woo China to offer the euro zone a lifeline will dominate the G20 Summit and leave Beijing holding the cards as world leaders try to restore market confidence. Despite denials from European officials that they have lost their negotiating position and promises that China would not be offered concessions, Europe’s bid to have Beijing contribute to a special purpose investment vehicle (SPIV) to leverage its EFSF bailout fund has put the ball in China’s court for France’s final G20 gathering.

Investors were so concerned that euro zone leaders would not reach agreement on solving the debt crisis in October that they cut equity holdings to the second lowest level in 12 months, Reuters polls showed on Monday. Reuters surveys of 56 leading investment houses in the United States, Japan, Europe ex UK and Britain showed the average stock holding in a balanced portfolio was 49.5 percent, down from 50.5 percent in September.

Bonds rose to 35.9 percent from 34.6 percent while cash slipped to 5.9 percent, still the second highest level of the past 12 months after September’s 6.3 percent. The rise in bond allocations reflected some of the fear of investors, but it was by now means even. Global allocations to U.S. debt jumped to 40.3 percent from 35.2 percent and holdings of Japanese bonds ticked up slightly. But euro zone debt holdings fell to 27.4 percent from 29.1 percent – the fourth month in a row they have been cut.

The UK GDP figures will prove to be the most effective. Analysts surveyed by Bloomberg gave a median quarterly prediction of 0.30%, from the last quarter’s 0.1%. Year-on-year, the survey predicted 0.4%, from the previous release of 0.6%. However, there is a strong possibility of a negative figure taking the market by surprise.