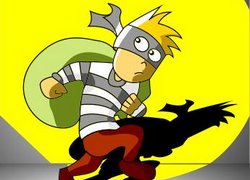 Watching Silvio Berlusconi surrender his power and position, without trying to lay a glove on his opponents, is puzzling and troubling in equal measures. It’s as if Silvio finally decided there’s nothing left worth fighting for. It’s impossible to put forward an argument that any of his premiership terms moved Italy forward economically or socially, many would testify that he’s the ultimate personification of a kleptocrat, but to observe his total capitulation has a more profound meaning. It reminds me of the phrase used by an ageing politician many years back as he was unceremoniously levered out of office and this same phrase was repeated by a modern day politician recently; “there’s nothing left to steal “..

Before a crowd of hundreds Gov. Paul LePage made this bold confession. When he was 12 years old, a French kid living on Lincoln Street, he used to hide out in Little Canada and steal Halloween candy from children. “Isn’t that awful?” LePage said. “And now I’m governor of Maine.” LePage wasn’t simply unburdening his soul or carrying on about a childhood memory. He had a point to make. The point was that the state of Maine has been deeply in debt in every budget but one since 1992. “Now that I’m governor of Maine,” he said, “there’s nothing left to steal…”

The irony that the former government of the Soviet Union was a technocracy should not be lost on the capitalism evangelists proposing technocracy as a solution the the Eurozone debt crises. Soviet leaders like Leonid Brezhnev had a technical background in education, and in 1986 approx. 89% of Politburo members were engineers.

Technocracy is a form of government where technical experts are in control of decision making in their respective fields. Engineers, scientists, health professionals, and those who have knowledge, expertise or skills compose the governing body. In a technocracy, decision makers would be selected based upon how knowledgeable and skilful they are in their field. Technical and leadership skills would be selected through bureaucratic processes on the basis of specialised knowledge and performance, rather than democratic election by those without such knowledge or skill deemed necessary. Some forms of technocracy are envisioned as a form of meritocracy, a system where the “most qualified” and those who decide the validity of qualifications are the same people. Other forms have been described as not being an oligarchic human group of controllers, but rather an administration by science without the influence of special interest groups.

The phrase technocracy derives from the Greek words tekhne meaning skill and kratos meaning power, as in government, or rule. William Henry Smyth, a Californian engineer, invented the word “technocracy” in 1919 to describe “the rule of the people made effective through the agency of their servants, the scientists and engineers” Smyth used the term “Technocracy” in his 1919 article “‘Technocracy’—Ways and Means to Gain Industrial Democracy,” in the journal Industrial Management. Smyth’s usage referred to Industrial democracy: a movement to integrate workers into decision making through existing firms or revolution. In the 1930s, through the influence of Howard Scott and the Technocracy movement that he founded, the term technocracy came to mean government by technical decision making.

Technocrats are individuals with technical training and occupations who perceive many important societal problems as being solvable, often while proposing technology-focused solutions. The administrative scientist Gunnar K. A. Njalsson theorises that technocrats are primarily driven by their cognitive “problem-solution mindsets” and only in part by particular occupational group interests. Their activities and the increasing success of their ideas are thought to be a crucial factor behind the modern spread of technology and the largely ideological concept of the “information society”. Technocrats may be distinguished from “econocrats” and “bureaucrats” whose problem-solution mindsets differ from those of the technocrats.

So now Italy has followed Greece in trampling over democracy and slavishly surrendering to the markets by installing ECB ‘champions’ two questions should be asked, who’s next and what form will their economic engineering take? Given that most economists agree that there is only one solution available; spin the wheels of fortune on the printing presses, perhaps we’ll witness various euro treaties and governance trashed in favour of this process, with or without Germany’s approval. Without would be impossible as Germany are part of the seventeen nation euro mechanism unless Germany lease the ECB their printing presses, once they’ve changed the Deutschmark plates..

Whilst the focus remains on the Eurozone the USA is facing some crunch issues of its own over the coming months. With a weather eye on the presidential election a year from now hard core austerity measures have so far been avoided by the democrats. However, with the debt ceiling having been raised and now in sight of another breach by April 2012, unless the proposed savings (in order to get the celling raised) are implemented and have an immediate and dramatic effect, then the USA administration will have to go ‘all in austere’ on its public. This is an incredibly difficult act to perform. Part of the rationale illustrates the absurdity, reducing the budget spend by circa $1.2 trl, gives scope to extend unemployment benefits.

The International Monetary Fund estimates that the U.S. government’s gross debt will exceed the size of its economy this year having flirted with 100% GDP figure several times this year so far and will rise to 115 percent of GDP by 2016, some economists suggesting 120% by 2014. Economists at Goldman Sachs believe that tighter fiscal policy will shave at least one percentage point off of U.S. economic growth in both 2012 and 2013, the pressure to cut spending deeply will only rise over the coming years, and investors could eventually balk at financing U.S. debt cheaply.

Senator Tom Coburn, a Republican active in the budget debate, told the Reuters Washington Summit last week “The bill collector is coming”. Coburn believes that the United States has at most two more years before bond markets demand punitive interest rates on its debt. At that point, he said, “We will be Greece.” The United States is enjoying a reprieve as the world is focused on whether the 17 members of the euro zone will stick with the single currency.

With government spending possibly falling in the new year, the first months of 2012 could be crunch time. U.S. inflation data on Wednesday is expected to show prices held steady in October, while the 12-month increase likely cooled to 3.6 percent from 3.9 percent. However, it is far from clear that the Fed would be able to ward off the bond vigilantes should the market turn on the United States.

The lesson we’ve had since the 1980s is that markets are bigger than governments. They used to try to manipulate the exchange rates and they gave up on that. Now they are trying to manipulate bonds, and inevitably they will lose.

The industrial production report measures the change of output of the industrial sector (eg, manufacturing, energy, etc). The figure may be adjusted to take into account seasonal variations in production and/or for the number of working days in the given period. A Bloomberg survey of analysts gives a median reading of a month-on-month change of -2.1% compared with the previous release of 1.2%. Another Bloomberg survey forecasts a year-on-year change of -2.1% compared with the last release which reported 1.2%.

« Cognitive Pattern Recognition in FX Trading Give Me Your Tired, Your Poor, Your Huddled Masses Yearning To Breathe Free »