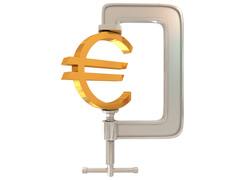 S&P went a step further on Tuesday evening, following its threats of Euro nation credit downgrades, by placing the top-notch rating of the euro zone’s 440 billion euro rescue fund, the European Financial Stability Facility (EFSF), on negative watch as it depends on the creditworthiness of the currency bloc’s six AAA-rated countries.

European Council President Herman Van Rompuy, who will chair the summit of the 27-nation European Union this week, proposed giving a bigger, permanent euro zone rescue mechanism the status of a bank that would allow it to access ECB funding.

German Chancellor Angela Merkel and French President Nicolas Sarkozy want to change the EU treaty to impose mandatory penalties on euro zone states that exceed deficit targets, aiming to restore market trust and prevent the crisis spiralling out of control. Germany has so far opposed any such move, which it says would breach a treaty ban on the ECB financing governments.

Treasury Secretary Timothy Geithner gave his on Tuesday to the Franco-German plan to tackle the euro zone’s sovereign debt crisis stating that the European Central Bank had to play a major role in any solution. Geithner was encouraged by moves towards “fiscal union” under which euro zone states would obey a common set of tight budget rules and stressed the central role in tackling the crisis of the ECB, which has been reluctant to take decisive steps until governments arrest their budget problems. Speaking after talks in Berlin with German Finance Minister Wolfgang Schaeuble, Geithner said euro zone countries need reforms to lay the foundations for the economic growth which is essential if Europe is to solve its debt problems.

The Federal Reserve looks set to hold off on easing monetary policy for a second meeting in a row as it gauges the impact of Europe’s crisis on the U.S. economy and ponders additional steps. As for further asset purchases, another remaining option in the Fed’s arsenal, policymakers appear to want to keep their powder dry in case Europe’s debt debacle is not resolved and it triggers a credit crunch that cripples U.S. financial markets.

“The scary scenario of course is if there was an implosion of the financial markets in Europe which would freeze funding markets for everyone. There, it’s appropriate and important that central banks around the world be prepared to play (their) role as a lender of last resort and keep financial markets functioning.” – Philadelphia Federal Reserve Bank President Charles Plosser.

Citigroup Inc is cutting 4,500 jobs worldwide, Chief Executive Vikram Pandit said on Tuesday, becoming the latest large bank to trim staff. Pandit, speaking at the Goldman Sachs Financial Services Conference, said the bank would record a $400 million charge in the quarter for severance and other expenses related to the layoffs.

Market Overview
The S&P 500 climbed 0.1 percent to close at 1,258.47 at 4 p.m. in New York after drifting between gains and losses for most of the day. French, Spanish and Austrian bonds fell after S&P said it may cut credit ratings on 15 euro nations and the European bailout fund. The euro was little changed at $1.34 after slumping as much as 0.5 percent. The yield on the 10-year U.S. Treasury note climbed four basis points to 2.08 percent, near the highest level since October. The dollar weakened against nine of 16 major peers.

U.S. equities fluctuated earlier as S&P said the European Financial Stability Facility, the region’s temporary bailout fund, may lose its top rating if any of the fund’s six guarantors are downgraded from AAA. Germany, France, the Netherlands, Finland, Austria and Luxembourg are the top-rated nations backing the rescue fund.

The Swiss franc weakened versus all 16 major peers, declining 0.6 percent against the euro and the dollar, after a report showed that consumer prices in the nation fell the most in more than two years last month, led by lower costs for imports, adding pressure on the Swiss National Bank to raise its franc ceiling to protect the economy.

« Round Number Trading United States of Europe Or A Disunited Autocratic Superstate? »