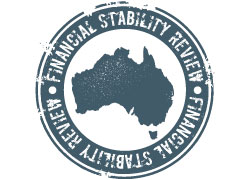 The Reserve Bank of Australia released its Financial Stability Review, which  is released twice per year and contains an assessment of conditions in the financial system and potential risks to financial stability.

In the report just released this morning, the Reserve Bank of Australia wrote that international financial markets have stabilized since last year and Australian banks are in a good position to address any future turmoil. In its biannual financial stability report, the central bank said confidence in global markets had clearly improved since the concerns surrounding European debt in late 2011. According to the RBS:

The RBA said these operations had provided much needed support for euro area banks in their funding and liquidity, although risks still remained.

“Even though conditions in financial markets have improved, the ongoing difficulties in Europe as well as the subdued outlook for global growth will continue to pose risks to global financial stability in the period ahead,” it said in minutes just released.

It warned that countries outside the euro zone were still susceptible to these risks. Australian banks, however, remained in good shape, and are less susceptible to global weakness, claimed the Reserve Bank of Australia in their recent release.

“The larger banks are in a better position than a few years ago to cope with the tighter liquidity situations given the improvements they have made to their funding, liquidity and capital positions over recent years,” it said.

Banks’ non-performing asset levels have come down a little recently, but remain higher than they were a few years ago, particularly for business loans.

The national banks were also continuing to record strong profits, the RBA said.

The household saving rate remains well above the levels recorded in the 1990s and early to mid 2000s. Many households are choosing to repay their debt more quickly than quickly than required.

The Aussie business sector was also performing solidly, as well as the commercial property sector, which had continued to improve since the recent fall. Since its last financial stability review in September 2011, the central bank has lowered the cash rate twice, bringing it to 4.25 per cent. In its last meeting on March 6, the RBA elected to keep rates on hold, reflecting the improving financial conditions.

Currently there is a lot of pressure on the RBA and chief Glenn Stevens to reduce rates at their next meeting. The housing and employment sectors are showing problems along with mining. There is a better than average chance that we will see a rate drop of 0.25%