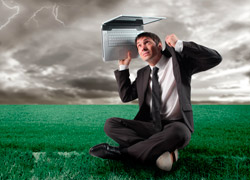 Tropical storm Isaac, spotted on the Atlantic, threatens to turn into a hurricane and hit Florida’s west coast.  Although forecasters at Miami’s National Hurricane Center are still uncertain about Hurricane Isaac’s impact, preparations are underway for any contingencies that may arise.  The hurricane is expected to hit Florida early next week coinciding with the Republican convention of party delegates from all over the country.  Meanwhile, as the forex markets remain ambivalent about the threats posed by the hurricane, forex news of the third round of quantitative easing measures continue to stir public interest.  In contrast to the fury that Hurricane Isaac brings, the forex market remained calm with markets consolidating after a two-week high on US Dollar sell-off volumes.

Today’s release of the much-awaited transcript is single most important event in the economic calendar.  Despite a dip in performance, the US Dollar was on a slight rebound as downside pressures were released albeit momentarily.  The USD showed a strengthening against the AUD, the CAD, and the NZD.  On the other hand, the CHF and EUR prices remained flat, while upticks on the GBP and JPY prices as against the USD were recorded.  Such lackluster forex trading is expected as historical figures show decreased trading activities during the month of August.  Shifting from technical analysis, the news about the release of the minutes of this month’s Federal Open Market Committee meeting stirred the market more than the news about the hurricane.  Forex news watchers are closely monitoring market sentiment as the transcripts are made public.

Just as the new channels were abuzz with the news about the hurricane, forex news updates were filled with news about the Feds possibly releasing a third quantitative easing stimulus package.  Most of the members of the Committee are in agreement that round three of their QE program is necessary to further boost economic recovery.  The slower than expected growth indicates the need for another round of large-scale asset-purchase program to support whatever gains the economy has built over the past years.  This third round of QE is also expected to spur the job market to bring the unemployment levels lower than the 8% level where the jobless rate has remained stagnant over the past three years.

Furthermore, the minutes of the FOMC meeting showed that other options in economic stimulus packages are being considered which includes a reduction in interest rates.  Careful evaluation and discussion of these options are being done with special attention to their effects on the money market.  More talks are expected to be in the offing about these options, with the Feds meticulously drawing up monetary policies that will result in more economic activity.  The Republican Party delegates and Florida residents continue to monitor and wait for news about the hurricane.  Forex news watchers likewise continue to look at how the Feds will roll out round three of their QE program.  Everyone else is on the sidelines preparing for whatever is necessary in order to make the most of current conditions, whether in the forex charts or in the weather charts.

« How to Find a Good Forex Signals Provider GBP Strengthens, While Harry Bares »