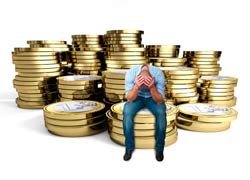 Can Desperation Lead to Inspiration?

Oct 13 • Between the lines • 7371 Views • Comments Off on Can Desperation Lead to Inspiration?

The updated weekly USA unemployment figures were published on Thursday. The number of Americans filing claims for jobless benefits hardly changed since the previous week. Applications for unemployment insurance payments decreased 1,000 in the week ended Oct. 8th to 404,000, Labor Department figures showed today. Economists forecast 405,000 claims according to the median estimate in a Bloomberg News survey. The USA population is circa 308 million and has grown by circa 30 million over the past decade. Roughly 75% are over 18 years of age. Out of a population of 231 million adults the supposed ‘good news’ today is that only a marginal 1000 less applied for unemployment benefit vis a vis last month.

There were still 404,000 new claims made last week and yet the mainstream media managed to get excited by a 0.247% decline declaring this news and the other extremely marginal improvement in the trade gap by 0.4%, as signs that the economy is improving. The USA economy has lost circa 10.5 million private sector jobs since 2008, the various stimuli have created 2 million jobs. Estimates for the total stimulus, taking into consideration all bailouts, rescues and QE, suggests approx. $3.27 trillion has been created/spent since 2008 and some commentators have put a price on every job created by the stimuli at circa $280,000 per job.

The received wisdom is that the USA has to produce in the region of 265,000 jobs per month to stand still, as such the unemployment rate would fall from 9.1% to closer to 5%. Therefore if the USA cannot create any more jobs rationally through private enterprise (to make up for the shortfall of ten million lost since 2008) how can any stimulus possibly be carried forward at such an expense per job?

The widening gap between the richest and poorest U.S. citizens is undoubtedly reshaping the U.S. economy, the genie is now out of the bottle. Left unchecked, the trend toward increasing inequality could shake social stability. Since 1980, approx. 5 percent of annual national income has shifted from the middle class to the nation’s richest households. The wealthiest 5,934 households in 2010 enjoyed an additional $650 billion, about $109 million each, beyond what they would have had if the ‘economic pie’ had been divided as it was in 1980, according to Census Bureau data. Will inspiration come out of desperation? Surely the USA cannot continue on its current trajectory. The Occupy movement is only just beginning to claw at the dirt of what truly lies beneath.

Stagnation or Stagflation?
Stagnation is probably the best many of the world’s largest developed economies can hope for over the next year, with several facing a significant chance of recession, according to a Reuters poll of around 350 economists showed on Thursday. 2011 has been a disappointment for the developed rich world economies, which have been crippled by the combination of; austerity, debt crises and natural disasters.

Backed up by Thursday’s weak trade figures from China, pointing to global economic weakness, the October quarterly survey suggests a bout of weak growth in many G7 economies that could extend deep into next year and beyond. The global economy is predicted to grow 3.8 percent in 2011, and just 3.6 percent next year in contrast to the 4.1 percent and 4.3 percent forecasts from the last quarterly survey in July.

Europe
Bit by bit, leak by (carefully orchestrated and heavily spun) leak, the bad news is trickling out with regards to the massive write down European banks will have to suffer in order to comply with the framework being touted as the grand plan. According to Bloomberg news German banks should prepare themselves for losses of as much as 60 percent on their Greek government debt holdings. The country’s banks held a conference call this week, the participants discussed the potential for losses on Greek bonds of between 50 percent and 60 percent.

With the “yes” vote now in the bag from Slovakia Van Rompuy And Barroso have announced that the €440 billion EFSF is fully functional, what measures they’ll have to undertake in order to leverage that fund to the estimated €2-3 trillion the Eurozone probably needs will be fascinating to witness unravel. The €440 billion would be enough to cover Greece’s default singularly.

Fitch Getting Fidgety
Fitch ratings took a scythe to certain banks’ credit ratings late Thursday evening, putting several on death watch whilst condemning a few others to their office sweepstake dead-pool. Fitch Ratings downgraded UBS on Thursday and placed seven other U.S. and European banks on credit watch negative, citing challenges in the economy and financial markets, as well as the impact of new regulations. The ratings agency lowered UBS’s long-term issuer default rating to A from A+.

Markets
Stocks fell, halting the biggest Standard & Poor’s 500 Index rally over seven days since 2009, following a decline in JPMorgan Chase & Co.’s profit amid concerns that equities have surged too far on optimism about Europe’s debt crisis. Commodities slid and Treasuries rallied. The S&P 500 slipped 0.3 percent at 4 p.m. New York time, paring its retreat from 1.4 percent. JPMorgan reported 33 percent less profit, excluding a $1.9 billion accounting benefit, as investment banking and trading income slumped. European markets fell sharply due to concerns over the banks’ liquidity and solvency. The STOXX closed down 1.67%, the FTSE down 0.71%, the CAC 1.33% and the DAX closed down 1.33%. the Italian bourse, the MIB closed down 3.71%, Unicredit’s issues and a potential vote of no confidence for Berlusconi’s government weighing heavily on an index that has already slumped by circa 24.8% year on year.

The economic releases that could affect sentiment in the morning London and European session include the following;

A Bloomberg survey of analysts shows a median prediction of 3.0% year on year for the consumer price index unchanged from the previous figure. The ‘core’ figure predicted was 1.5% from 1.2% which was the figure released prior to this. Month on month the expectation was 0.8% from 0.2% previously.

« The U.S. Senate Needs to Research Yin Yang and Stop Playing Ping Pong If a Tree Falls in the Forest and There is Nobody Around to Hear It, Does It Make a Sound? »