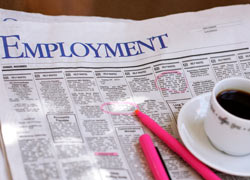 Where Have All The Workers Gone

Today, the US Commerce Office is expected to report the import-export trade balance in services and goods was $48.4 bn. in the first month of the year, only a little modified from December.

The $580 bn. annual trade deficit is the most serious barrier to creation of jobs and lowering unemployment, the import of personal goods from China and petroleum products account for nearly the entire problem.

36Financial analysts agree the speed of economic recovery has been slowed by the large and growing deficit. Consumers are spending again as household debt is rising; nonetheless each USD that goes abroad to get oil or Chinese consumer products, and doesn’t return to buy US exports, is lost domestic demand. Money going to China rarely circulates back to the US.

This afternoon, in the US, the Labor Dept is set to report the economy created 204,000 jobs in Feb; while, 367,000 positions must be added every month for the next 36 months to bring unemployment down to six percent.

With Federal, State and Local governments cutting payrolls, the non-public sector must add about 390,000 jobs each month to reach this goal. Expansion of more than four to five percent per year is required to attain that.

Unemployment has dipped from 10% in October 2009 principally because working aged adults are dropping out of the work force they’re neither employed, nor looking for work.

The unemployment rate has fallen to 8.3%, as the proportion of adults taking part in the work force, those employed and those underemployed but making the true gain in employment drop from 65.0 to an adjusted 63.7 percent.

The share of full-time gainfully employed hasn’t changed its stuck at 58.5 p.c. In this recovery, the best jobs creation program has been to persuade more adults that they do not want a job or it is futile to search for a reasonable position, and simply give up looking. This phenomenon has accounts for 75% of the decrease in the jobless rate over the last twenty-seven months. America like many European nations is developing a generation of lost workers.

Simply to keep abreast of growth expansion, which averages at two percent a year, and natural increase in the adult population, which is about one percent, the economy must grow at three percent a year unless more adults give up looking for work. As stronger expansion draws immigration and inspires idle adults to reenter the work force, expansion of about 3.5 percent is required to keep up a full work economy.

This is in sharpened contrast to Ronald Reagan’s business recovery. Like Obama, he inherited a distressed economy, implemented radical measures to reorient the private area, and accepted huge budget deficiencies to get their plans in effect. As Reagan campaigned for re-election, his post-Carter weakened economy grew at a 7.1 % rate. That growth set the scene for the 20 years of stable, non-inflationary expansion.

Most economic analysts agree, expansion is insufficient because demand is too feeble. The trade delinquency is the problem; America needs to keep its greenbacks at home and keep job creation growing so that future generations can have a strong economy.

« Gold Could Get Its Glimmer Back Is Inflation Sneaking In The Back Door? »