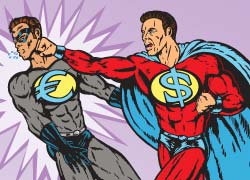 “In the coming weeks and months, we believe we are more likely to hear rhetoric about currency wars rather than inflation wars – which is why today we have a tactical short term call to be long US dollars,” UBS economists told clients last week.

A currency war of sorts may soon be at foot in what has seemed like a lopsided “global currency war” as emerging nations begin to slow, the US and EU money-printing machines are finally running low on ink and the pressure is coming from the BRIC and other emerging nations.

The five-year-old “war”, as the Finance Ministry of Brazil has called it,  the “de-valuationist” policies of developed nations seeking relief from their own credit crunches, may well just come full circle and burn itself out as a result.

The reverse course of emerging currency depreciation carries its own significant risks, from skewing investment decisions to aggravating trade diplomacy. As each country’s central bank makes decisions to help get their economy jump-started or to halt the growing fiscal problem, or recession, their decisions in fact in my cases harm their neighbours or the small economies that depend on them so much. When political pressure is heaped on central bank decision makers with politicians only trying to appease their voters, sometimes it is not easy to make the best decision and any decision has consequences.

Japan’s success this year in finally weakening the yen, by continuously printing  from its central bank, may prove pivotal by disturbing the delicate balance in Asia. Some economists warn the yen’s more than 10 per cent retreat since January is already forcing China’s hand on its own controversial policy of yuan capping in a way that could cause consternation in Washington in an election year.

The USD has climbed from post World War II lows just a short few weeks ago to trade over 84.00 this week. That is quite a drop for the yen. Japanese exporters need the USD to exceed 82.00 to generate profits and remain competitive.

Far from seeing a sharply rising yuan emerge from China’s policy of greater exchange rate flexibility – core U.S. and multilateral demands – the yuan has actually weakened this year as China’s economy and inflation rates slow, its trade account worsens and fears of a “hard landing” there persist. This is normal and should have been expected and predicted. China could not keep the growth rates they had set when their markets were facing recession and austerity measures. Once your customers’ contract, production and manufacturing follow, it is surprising that it is just now starting to show in the Chinese economy. Although China has been witnessing huge internal growth and inflation.

Even though the tightly-controlled yuan has gained more than 10 per cent against world currencies over the past five years, it’s one of the few major emerging market currencies to remain lower against the US dollar so far in 2012.

China recorded its biggest trade deficit in more than a decade in February and signs of slowing economic activity are mounting in everything from real estate prices to ore demand to foreign direct investment.

« Crude Oil Continues To Rise Get Out Of The Way Greece, Its Spain's Turn In The Spotlight »