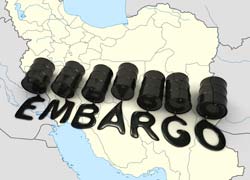 The EU oil embargo due to come into effect in July to stop ECU members from importing Iranian oil would also stop EU insurers and reinsurers from indemnifying vessels carrying Iranian crude and fuel anywhere internationally.

“We disagree this regulation applies too broadly as it also hits non-European corporations. Not only South Korea but also Japan, China and others face the same situation,” stated a South Korean official. “We could fail to receive Iranian crude from July one if no solution is reached,” recounted the source, who declined to be identified as he wasn’t permitted to speak to the media.

The ECU embargo is directed at cutting Iran’s oil income as an element of a wider campaign to cause economic hardship Tehran for its suspected nuclear weapons program.

Rising global political strain between Western Nations and Iran and doubt over the way in which the ECU embargo and U.S. sanctions will impact oil supply have driven up benchmark crude costs, with Brent crude up around 14%.

Higher oil costs mean Iran is receiving a heftier price for its exports, while importers such as Japan and South Korea face a rising fuel bill.

There are always those who will suffer financial consequences over actions, but the actions are more important than the balance sheet. These firms, who are objecting, are more concerned with immediate profits then with what is best for the global community.

China, India, Japan and South Korea are Iran’s top 4 oil clients, purchasing over fifty percent of the OPEC producer’s exports of 2.6 million barrels every day.  And be assured that with the embargo, these nations will be able to negotiate reduced prices from Iran as they have limited purchasers.

The sanctions are influencing oil trade, with EU insurers halting tanker coverage for new contracts to ship Iranian crude oil. This is the goal of an embargo to inflict economic hardship on Iranian Oil shipments to force the Iranians to deal with the nuclear issue.

The sanctions have recently forced many individual oil tanker firms, eg Frontline and Maersk Tanker, to stop carrying Iranian oil on their ships. India’s biggest shipping company, Shipping Company of India, was compelled to cancel an Iranian crude cargo last month after its EU insurers refused it coverage. This means that the embargo is having an effect.

The firm is in negotiations with insurers to provide replacement coverage, while the Indian administration is considering offering sovereign guarantees. India could eventually join the western nations and also stop purchasing from Iran, and save these problems.

Although Japan, China and other Asian maritime insurers don’t fall under the sanctions regime, they’re still exposed due to their reliance on Europe’s reinsurance market, where they have to hedge their risk. “Chinese tankers are exposed to similar risks as European ones as the sources of reinsurance are similar,” recounted an official with a government owned Chinese ship-owner.

Once the ECU sanctions come into force, Japan’s PI Club, the nations’ main ship insurer, may simply be in a position to provide coverage of up to $8 million to tankers operating in Iran, down from the prevailing $1 billion. Any reductions would force club members who need to continue to import Iranian oil to get extra coverage from outside the Japan PI Club, doubtless in China, Russia or the Middle East.

Even if Russian firms make a decision to accept, there is a question about whether or not their balance sheets are sound enough and whether or not they will certainly pay in the event of an accident. It is the same for the Middle East firms