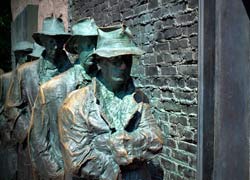 U.S. Banks’ Revenue Growth In 2011 May Have Been The Slowest Witnessed Since The Great Depression And Is Unlikely To Improve In 2012

Jan 18 • Between the lines • 3391 Views • Comments Off on U.S. Banks’ Revenue Growth In 2011 May Have Been The Slowest Witnessed Since The Great Depression And Is Unlikely To Improve In 2012

Many of us within the investment and trading community have scratched our collective heads when considering just how gravity defying the equities market has been over the past two years. Due to the paradigm shift and mixed phenomena of bailouts, rescues and quantitative easing (underscored by a unified zirp policy adopted by most leading economies) cash had very little places to find a resting place, ergo share prices were bid up on increasingly shallow trading volume. Notwithstanding this fact we now learn that a relentless programme of share buy backs has been actively promoted.

This revelation, underpinned by falling income, profits and revenue from banks, makes it an extremely dangerous and combustible time for investors in the equities market. I’m not about to insult our readers’ and clients’ intelligence to suggest where, in my opinion, is the safest haven for cash right now..

Apparently equities are getting scarcer in the U.S.A. for the first time since the secular bull market began in 2009, companies are cutting share sales to the lowest level since 2006 whilst engaging in share buy back schemes at the fastest pace in four years. Over 1,970 U.S. companies repurchased $397 billion of stock last year, whilst issuing only $169 billion of new equity.

Shrinking supply supports prices and company executives would rather buy back shares than spend the cash to expand. Vanishing growth prospects will limit gains and deter investors who pulled money from stock funds for eight straight months through to December, the longest stretch in at least two decades.

U.S. share sales fell 8 percent in 2011 as interest rates near record lows spurred companies to issue bonds instead. Corporate debt sales rose 3.2 percent to $800 billion, exceeding stock offerings by the widest margin since 2008, according to data compiled by Bloomberg.

U.S. banks’ revenue growth in 2011 was probably the slowest since the Great Depression and is unlikely to improve in 2012, Mike Mayo, an analyst at CLSA Ltd., said on Bloomberg Television last month. JPMorgan, the nation’s largest bank by assets, said last week that revenue fell 18 percent to $21.5 billion. Citigroup’s revenue was the lowest since the fourth quarter of 2008. The New York based bank said it would lose 5,000 employees, 25 percent coming from securities and banking. Citigroup’s earnings slump capped a year in which the shares slid 44 percent amid concern troubled European countries would default.

Market Overview
Stocks advanced on Tuesday, pushing the S&P 500 to its highest since early August, but USA markets then retraced sharply later in the session due to Citigroup’s steep drop in profit. The financial sector had previously outperformed the wider market in the first few days of 2012.

Citigroup’s stock slid 8.1 percent to $28.25 after it reported weak earnings.The KBW Banks Index lost 1.4 percent. Through Friday, the Index was up approx. 10 percent for the year, while the S&P 500 was circa 2 percent higher.

The euro rose 0.6 percent to 97.87 yen, arresting its two day decline, it strengthened versus nine of 16 major peers. The dollar depreciated against 14 of its 16 major counterparts. The Dollar Index declined 0.5 percent, retreating from a four-month high. Oil rose 2 percent to $100.71 a barrel, snapping a three-day slump, as France pushed for faster enforcement of Europe’s proposed ban on Iranian oil.

The UK jobs figures could affect the sentiment of sterling. A Bloomberg survey predicts a rate of 8.30% for the ILO rate, the same as the previous month. A survey shows a median forecast of +7000 for extra claimants compared to last month’s change of +3000.