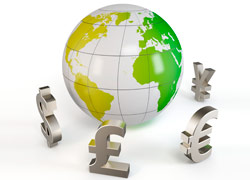 Is “Currency” The Real Reason The ‘Sabre-Rattling’ Versus Iran Has Escalated?

Jan 9 • Between the lines • 2017 Views • Comments Off on Is “Currency” The Real Reason The ‘Sabre-Rattling’ Versus Iran Has Escalated?

You don’t have to dig too deep by using Google or Bing in order to find alternative theories, beyond the deeply intelligence insulting rhetoric of “weapons of mass destruction”, for the invasion of Iraq. Similarly the Libya ‘liberation’ shared a common theory, currency wars. Theories suggest that Iraq threatened to sell oil in Euros, whilst Libya’s proposal was apparently slightly more complicated; a new African dinar backed by gold.

The destruction this could have wreaked on the status quo, that successive USA administrations have gone to any extremes to protect, cannot be under-estimated. The invasions weren’t “all about oil” they were all about the dollar ‘pricing’ oil and continuing to be the reserve currency of the global finance system.

Iran and Russia have apparently replaced the U.S. dollar with their national currencies in bilateral trade, Iran’s state-run Fars news agency reported, citing Seyed Reza Sajjadi, the Iranian ambassador in Moscow. The proposal to switch to the ruble and the rial was raised by Russian President Dmitry Medvedev at a meeting with his Iranian counterpart, Mahmoud Ahmadinejad, in Astana, Kazakhstan, of the Shanghai Cooperation Organisation, the ambassador said.

Iran has replaced the dollar in its oil trade with India, China and Japan, Fars reported. The European Union, the U.S. and the United Nations are applying sanctions against Iran over its nuclear program. Iran says its nuclear efforts are for civilian purposes and to generate electricity, while the U.S. and several major allies say the program represents a weapons threat.

Iran has the ability to block the Strait of Hormuz “for a period of time,” and the U.S. would take action to reopen it, Joint Chiefs of Staff chairman General Martin Dempsey said. Should Iran try to close Hormuz, the U.S. “would take action and reopen” the waterway, said Dempsey, President Barack Obama’s top military adviser.

Blocking the Strait of Hormuz, a strategic shipping lane linking the Gulf of Oman with the Persian Gulf, would constitute a “red line” for the U.S., as would Iranian efforts to build a nuclear weapon, Defence Secretary Leon Panetta said on the same program.

SocGen have laid out two scenarios in relation to how the Straits of Hormuz movements and exercises could affect the oil price.

Scenario 1: EU enacts a full ban on 0.6 Mb/d of imports of Iranian crude. In this scenario, we would expect Brent crude prices to surge into the $125-150 range.

Scenario 2: Iran shuts down the Straits of Hormuz, disrupting 15 Mb/d of crude flows. In this scenario, we would expect Brent prices to spike into the $150-200 range for a limited time period.

Eurozone Meetings Re-Start
The endless schedule of meetings, that Merkel and Sarkozy engaged in during 2011, is likely to be revisited over the coming months as during this second week of trading the new year reverts to the pattern experienced during the last two quarters of 2011. German Chancellor Angela Merkel and French President Nicolas Sarkozy meet for the first time this year in order to cement a position to carve out a definitive plan for rescuing the euro over the next three months. March is the critical focal point at which time Greece may have to exit the Eurozone (in an orderly fashion) if it’s bond holders can’t agree haircuts above 60% and it fails to raise new debt and or recycle current debt.

The two leaders gather in Berlin tomorrow in order to outline a blueprint for the new fiscal discipline rulebook negotiated at a Dec. 9 summit that seeks to create a “fiscal compact” for the 17-member euro area. Their meeting is scheduled to start at 11 a.m. local time at the Federal Chancellery followed by a joint press conference at about 1:30 p.m.

The German and French leaders are fully committed to a plan to install new guidelines by March. The crisis that began in Greece two years ago has moved to the euro-area’s core and leaders are struggling to convince investors they can contain the risk and assure the euro’s survival.


Europe is slowly but surely mastering the debt crisis, even if a solution has taken longer than hoped. We’ll put this crisis behind us, but it has taken longer than we hoped for. We often acted a bit late and our decisions were often a bit too weak. But in most cases, we’ve worked in the right direction.

The euro, which posted a second consecutive annual loss to the U.S. dollar in 2011, has extended the decline and dropped 1.7 percent so far this year. The currency lost 9.4 percent in the last six months.

Economic calendar data releases that may affect the sentiment during the morning trading session.

Sentix confidence index is a study of investors’ sentiment towards the Euro-zone economy. A high figure suggests investments are increasing and that investors are optimistic about the state of the economy. An increasing figure is bullish for the euro.

« So The Euro Disappears, What Happens Next? Reasons To Be Cheerful Parts 1-2-3 »