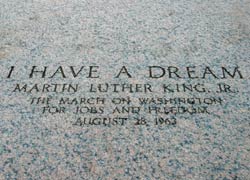 I have a dream. Did you Mr. Obama, Can You Remind Us What It Was?

The most vain glorious of politicians could not possibly let an opportunity pass, such as the unveiling of the Martin Luther King memorial, without attempting to obtain some reflected glory and score political points. Likening the battle for racial equality to his political struggles in a divided Washington is such an impotent comparison that even a mastery of neuro linguistic programming couldn’t possibly pull it off. But credit were credit is due, politicians don’t rise to the top without having breath taking arrogance. The juxtaposition between what Martin Luther King lived, breathed and acted on, in comparison to what Obama ‘stood’ for until elected is beyond irony. The overall policy disappointment since his election in 2008 has been directed at those most in need in his homeland. To witness so many becoming destitute on his watch is shameful.

Whilst his administration inherited a perfect economic storm from the previous administration, (some would say deliberately engineered), there are certain facts that Obama can take ‘credit’ for and illustrates his continual indifference despite his claims otherwise. Despite the ‘best’ efforts the Supplemental Nutrition Assistance Program could not be re branded as anything but “food stamps” in the consciousness of the USA. Close on forty six million Americans would go hungry without the programme, a number which has accelerated dramatically on Obama’s watch. At one point in 2009 the recipients were growing by 20,000 per day, since May 2010 the amount of USA citizens needing food stamps has ballooned by six million.

“In the financial system we have today, with less risk concentrated in banks, the probability of systemic financial crises may be lower than in traditional bank-centred financial systems.” – Tim Geithner 2006

Mr Obama was heavily criticised for his appointment of Tim Geithner as the U.S. Treasury Secretary. Mr Geithner has wasted no time at the latest G20 meeting to offer the USA’s opinion as to how the IMF should handle the euro zone crisis. Finance ministers and central bankers of the Group of 20 major economies said they expected an October 23 European Union summit to “decisively address the current challenges through a comprehensive plan”. Europe’s plan, which has still to be made public, apparently includes writing down Greek bonds by as much as 50 percent, establishing a fail safe for banks and magnifying the strength of the €440 billion temporary rescue fund known as the European Financial Stability Facility.

“The plan has the right elements,” U.S. Treasury Secretary Timothy F. Geithner said in Paris. “They clearly have more work to do on the strategy and the details.” Those details will presumably and definitively reveal what the damage is to banks’ financial positions if they take the 50% haircuts. The communique from the G20 urges the euro zone “to maximise the impact of the EFSF (bailout fund) in order to address contagion”. EU officials said the most likely option was to use the 440 billion euro fund to offer partial loss insurance to buyers of stressed member states’ bonds in a bid to stabilise the market.

German Finance Minister Wolfgang Schaeuble said Sunday, adding that he hoped Europe’s banks would work with governments on a plan. In July 2011 European banks agreed to a voluntary write-down of 21 percent on their Greek debt. In an interview with German broadcaster ARD Schaeuble said;

“A lasting solution for Greece is not possible without a debt write-down, and this will likely have to be higher than that considered in the summer. The details are being discussed now. They don’t all have to be ready by the EU summit but the principles must be clear. Of course we would like, if possible, to agree together with the banks. But it is clear, there must be a level of participation which is enough to bring about a lasting solution for Greece. That is enormously difficult. We need better regulation and we also need a better capitalisation of banks, which is what we are doing in the short-term. Not everyone will like it, but it is the best way to ensure that we don’t have an escalation in the crisis due to a collapse in the banking system. We must fight the danger of contagion. We simply have to recognise that banks don’t trust each other at the moment, which is why the interbank market doesn’t function as it should. The best means to tackle this is better capitalisation.”

Efforts by some countries to increase the IMF’s war chest to fight the crisis ran into resistance from the United States and others, most notably the BRICS nations on Friday, burying the idea for now and putting the onus firmly back on Europe. Geithner stated the IMF already has substantial financial firepower and Washington would support committing more of the existing resources to supplement a well-designed European strategy with more euro zone funding but would not contribute to a increase in direct funds for the IMF to rescue Europe.

While the European crisis was the main focus, Washington and Beijing have continued to disagree over China’s currency at the G20 meeting. Geithner said China should let the yuan rise more rapidly to benefit global growth. Chinese Premier Wen Jiabao rebuffed U.S. pressure for a more rapid appreciation, assuring exporters at the Canton Fair in Guangzhou on Saturday that China’s exchange rate would remain “basically stable” to protect them. Chinese negotiators prevented the G20 from going beyond wording issued at their last meeting in Washington on the need for emerging market nations’ currencies to be more flexible.

The U.S. dollar advanced versus the Kiwi, climbing to 80.34 cents in early Asia-Pacific trading from 80.53 cents at the end of last week. The dollar also fell to 77.02 yen from 77.22 yen, is virtually flat versus the euro at $1.3871 from $1.3882 and sterling. Canada’s dollar has strengthened since July as European officials appear to be making progress on the rescue plan, the region’s debt crisis has stoked appetite for riskier assets such as the Loonie. The currency advanced 2.9 percent last week versus its U.S. counterpart, the second straight gain, as stocks climbed and crude oil topped $87 a barrel. Economists project Statistics Canada data will show Oct. 21 that inflation slowed last month.

“The combination of better U.S. data and hope for Europe have helped soothe markets and drive risk aversion lower,” said Camilla Sutton, head of currency strategy at Bank of Nova Scotia in Toronto, in an e-mail yesterday. Technical indicators and lower readings on a volatility index suggest “the Canadian dollar should hang onto the gains it’s made over the last five sessions,” she said. The Canadian dollar closed at C$1.0098 per U.S. dollar in Toronto on Friday, the largest gain since the five days through July 1. It touched C$1.0097, the strongest since Sept. 22. One Canadian dollar buys 99.03 U.S. cents.

The U.S. Administration has postponed a report on the exchange-rate policies of its trading partners, including China, until after global meetings scheduled for this month and next. The delay gives the USA a chance to assess progress following several international meetings including the G 20 finance ministers’ session in Paris, a G-20 summit in November and meetings involving Asia-Pacific finance ministers and leaders in November, the Treasury Department said in a statement yesterday, a day before the report was due.

« How Much? – Do You Take cheques? Oh those Germans and Their Wacky Sense of Gallows Humour.. »