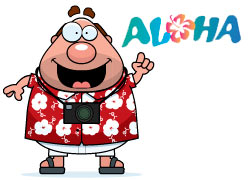 The APEC Honolulu meeting has ended with as little ‘hard-wired’ policy agreement as achieved during the endless stream of Eurozone meetings. The outcome? Who will blink and be the first to lose their gross Hawaiian shirt? There’s enough images available in the media of the APEC leaders posing for photo opps in customary shirts in Honolulu to make you want to puke into your Blue Hawaiian cocktails and “keeping it real’ by using a more earthy down to earth location wasn’t on the menu..Haiti anyone? As to whether Obama had a few too many and woke up saying; “hey Michelle, what did I say last last night when speaking to China?” is anyone’s guess. But he’s gone and upset them again and what does China do? They immediately re-affirm their threat of two days ago to downgrade the USA’s credit rating and slate the USA in their biggest daily news network.

“For the United States, it should put its house in order before chiding others. Since the onset of U.S. subprime crisis in 2007, it was the country’s domestic economic problems that triggered a disastrous financial crisis that swept the world. Excessive spending for many years has added up debts. Meanwhile, traditional strong industries such as finance and auto were devastated by the crisis, pushing up unemployment. In face of such serious domestic problems which probably could trigger a new global economic tsunami, many U.S. politicians seemed only to care about how many votes they could get, without having a single thought about what kind of the global responsibilities the country should take. Thus it should come as no surprise that the angry “Occupy Wall Street” protesters are calling for an end to the political tricks in Washington..”

So that went down well then Mr. Obama? Mr Ron Paul, the Republican candidate, who you need a wide screen tv on wide screen mode to see, given how far from the centre of the picture he’s pushed from in the televised debates (he still keeps winning), has this to say on the USA Bank’s exposure to Europe.

“The global economic situation is becoming more dire every day. Approximately half of all US banks have significant exposure to the debt crisis in Europe. Much more dangerous for the US taxpayer is the dollar’s status as reserve currency for the world, and the US Federal Reserve’s status as the lender of last resort. Nothing has been solved, however, by offering up the productivity of Americans as a sacrificial lamb. Greece is set to be the first domino to fall in the string of European economies at risk. Rather than learning from Greece’s terrible example of an over-consuming public sector and drowning private sector, what is more likely from our politicians is an eventual bailout of European investors. The US has a relatively small exposure to overwhelmed Greek banks, but much larger economies in Europe are set to follow and that will have serious implications for US banks. Greece is technically small enough to bail out.  Italy is not.  Germany is not.  France is not. It is estimated that US banks have over a trillion dollars tied up in at-risk German and French banks. Because the urge to paper over the debt with more credit is so strong, the collapse of the Euro is imminent. Will the Fed be held responsible if the Euro brings the US dollar down with it?”

In Greece tens of thousands of people angry at more than a year of austerity measures are expected to rally on Thursday which is the anniversary of a 1973 student uprising that eventually helped to bring down a 1967-1974 military junta. The march could be the biggest in months of protests and would complicate discussions with the troika by shutting down Athens, particularly as previous rallies have turned violent.

This potential outbreak comes at the same time that Greece’s conservatives in the hastily cobbled together coalition vowed on Monday to reject any new austerity measures in return for the aid that is keeping Greece from bankruptcy, signalling that the new coalition government will not enjoy the kind of cross-party support its lenders demand. Euro zone leaders are demanding the conservative New Democracy and its two coalition partners – the Socialists and the right-wing LAOS party – sign pledges that they will do what is necessary to make a new 130 billion euro ($177 billion) rescue loan package work. If not Greece’s international lenders will withhold an 8 billion euro aid tranche Athens needs to avoid running out of cash next month. New Democracy leader Antonis Samaras said he would not sign any pledge for new belt-tightening.

His stance suggested a continuation of wrangling between New Democracy and the Socialists of fallen prime minister George Papandreou that last week pushed Greece to the brink and prompted EU peers to consider Greece’s exit from the euro.

BlackRock, one of the world’s largest asset managers, said debt restructuring in Greece, Portugal and Ireland should include losses of 75 percent to 80 percent for private bondholders – above the 50 percent envisioned in Greece’s rescue package – to help stop a global meltdown.

Governments are falling, bond yields are zig-zagging by whole percentage points and markets around the world are locking up: the euro zone turmoil risks turning into a global crisis, it said in a research note.

German Chancellor Angela Merkel said on Monday that Europe could be living through its toughest hour since World War Two as new leaders in Italy and Greece rushed to form governments and limit the damage from the euro zone debt crisis. Prospects are uncertain as the German government, the Bundesbank and hardliners in the European Central Bank have blocked key policy options. These include issuing common euro zone bonds, mutualising the euro zone’s debt stock, letting the ECB create money to fight the crisis, or having it act as lender of last resort, directly or via the euro zone rescue fund.

Monday’s euro zone industrial production figures pointed to a sharp contraction toward the end of the year and the risk of a double-dip recession. The slide in output at euro zone factories was the biggest since February 2009 – when the economy was reeling from the worst financial crisis since the 1930s.

The SPX closed down 0.96%. The main European indices closed down as the positive sentiment that was apparent in early morning trade quickly evaporated once the reality of the Italian bond price began to reverb throughout the markets. The STOXX closed down 1.57%, the UK FTSE closed down 0.47%, the CAC closed down 1.28% and the DAX closed down 1.19%. The IBEX closed down 2.15% and the MIB down 1.99%. The future for crude is currently up by $14 a barrel having suffered a sharp correction on Monday. The SPX and FTSE equity index futures are currently flat.

Economic calendar releases that may affect market sentiment in the morning session.

« Give Me Your Tired, Your Poor, Your Huddled Masses Yearning To Breathe Free The Greeks And Romans Are To Make Sacrifices »