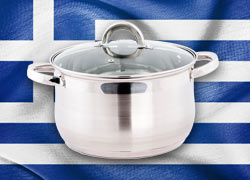 Greece Is Put Into A Dutch Oven

There are two definitions for a Dutch Oven and both are equally fitting for the stunt the Dutch finance minister pulled during the final delicate negotiations over the details of the Greek bailout;

The Dutch finance minister has revealed that he wants a “permanent Troika presence” in Athens, in return for the second finance package. Jan Kees de Jäger made the comments, which temporarily threw the Greek crisis into fresh uncertainty, before the talks began in Brussels on Monday afternoon. He insisted that the European Union, the European Central Bank and the International Monetary Fund have a fixed role within the Greek capital in the years ahead.

Euro zone finance ministers inched towards approving the second bailout for debt-laden Greece on Monday helping resolve Athens’ immediate repayment needs but would not revive the nation’s shattered economy. Agreement on the 130-billion-euro rescue package on strict conditions would finally bring to an end months of uncertainty that has shaken the currency bloc, and avert Greece’s bankruptcy.

Officials are struggling to make the numbers crunch. EU sources said they had to find a further 6 billion euros to make the financing work, private investors might have to take bigger losses. After seven hours of talks, senior officials said ministers had found ways to cut Greece’s debt to between 123 and 124 percent of gross domestic product by 2020, but were pressing for more. Negotiators for private bondholders had offered to accept a bigger loss to help plug the funding gap. The often referred to haircut may now need to exceed 70%.

A report prepared for ministers by EU, European Central Bank and IMF experts, states that Greece would need extra relief to cut its debts to the official target of 120 percent of GDP by 2020.

There’s some glaring issues in the troika’s report into Greece;

The troika suggests ways that the European Central Bank, and others, could bring Greek debt down to the 120% target. They are:

Standard & Poor’s 500 Index futures added 0.5 percent. U.S. markets were closed for a holiday on Monday and the yield on the 10-year Italian note fell 10 basis points. Copper broke a six-day losing streak in London. Oil climbed to a nine-month high as Iran said it halted some crude exports.

Commodity Basics
Copper added 0.7 percent in London. Oil in New York jumped as much 2.1 percent to $105.44 a barrel, the highest price for a most-active contract since May 5. Iran will supply crude to “new customers” instead of companies in the U.K. and France, according to the oil ministry’s news website, Shana, citing Alireza Nikzad Rahbar, a spokesman.

Forex Spot-Lite
The euro climbed 0.9 percent versus the yen. The Dollar Index, which tracks the U.S. currency against those of six trading partners, declined 0.4 percent. The euro appreciated 0.8 percent to $1.3243.