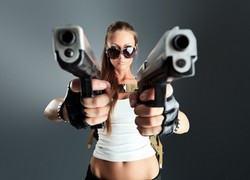 « The Iron Lady Got Myself A Gun »