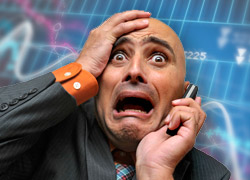 I thought this Between The Lines blog entry would be a light hearted joke given ‘the Mark’ relates to money, you know the script; 666, Berlusconi (beast), Rome, “muhahahahaha” etc. Then the parallels got a bit scary once I engaged in a bit of fact finding research. The rise of a supranational currency in the name of counter terrorism and economic stability. The Mark as a requirement on an object such as a credit card for all commerce, or the Mark on the hand or forehead to enable transactions. The stamped image of Rome’s emperor where the end of days of the euro as a currency may be being played out right now..gulp…

Perhaps this is what we get for the Vatican sticking its oar into the discussion last month and suggesting a new world order with a single currency. Eat your heart out Dan Brown, we don’t need Tom Hanks to star in this real life drama, just pull up a chair and buy the popcorn, Rome is burning and Silvio isn’t playing second fiddle to Nero. Perhaps he has hired an empty tanker to set sail laden with the circa $130 billion of gold Italy has on its balance sheet, that gold might go a long way to adding some leverage to Italy’s debt laden pot.

A futurist view of the mark of the Beast is the rise of a supranational currency that could be a hallmark of the End Times and that the mark of the beast will be a sign on the forehead and/or upper side of the hand. According to the Futurist view, to overcome the difficulties the Antichrist will use forced religious syncretism (i.e. in the name of counter terrorism and world economic stability) to enable the creation of the supranational currency. Some interpret the mark as a requirement for all commerce to mean that the mark might actually be an object with the function of a credit card.

A preterist view of the Mark of the Beast is the stamped image of the emperor’s head on every coin of the Roman Empire: the stamp on the hand or in the mind of all, without which no one could buy or sell. New Testament scholar Craig C. Hill says;

“It is far more probable that the mark symbolises the all-embracing economic power of Rome, whose very coinage bore the emperor’s image and conveyed his claims to divinity (e.g., by including the sun’s rays in the ruler’s portrait). It had become increasingly difficult for Christians to function in a world in which public life, including the economic life of the trade guilds, required participation in idolatry.”

A similar view is offered by Craig R. Koester;

“As sales were made, people used coins that bore the images of Rome’s gods and emperors. Thus each transaction that used such coins was a reminder that people were advancing themselves economically by relying on political powers that did not recognise the true God.”

I think I’ll just stick to the joke and the irony, or is it coincidence? Whilst Italy’s borrowing costs didn’t quite reach the ‘inflection’ point of 7.0% it has flirted dangerously close on a number of occasions during Monday’s trading sessions. What should be concern is just how rapid the rise has been, from 6% to 6.5% and further in just over a week, 28/10/2011.

Italy has expanded less than the European average for more than a decade and created a debt that tops that of Greece, Spain, Portugal and Ireland combined. The country faces an average of almost 20 billion euros ($27.5 billion) of bond maturities a month next year at a time when it must pay 470 basis points more than Germany to borrow for 10 years. Berlusconi’s government in August approved 45.5 billion euros in austerity moves, its second deficit-cutting plan in a month, to secure European Central Bank purchases of Italian debt after yields surged above 6 percent. The central bank is free to stop the buying if Italy fails to pass its reforms, ECB Governing Council member Yves Mersch told la Stampa daily in an interview.

Italy, which is due to auction treasury bills this week, sells more than 200 billion euros of bonds a year. Its 1.9 trillion-euro debt amounts to 120 percent of gross domestic product, and is second in Europe to that of Greece with a 340 billion euro debt and a debt versus GDP of 142%.

Monday proved to be as eventful and unpredictable as the recent previous first day of the week sessions. Italian government bond yields rose to their highest since 1997 – approaching levels regarded as unsustainable – as political turmoil in Rome threatened to drag the euro zone’s third largest economy deeper into regional debt crisis. Greece’s outgoing Socialist prime minister and conservative opposition leader raced to put in place an interim national unity government for just long enough to save the country from imminent default by implementing a new bailout program. France announced a new wave of austerity measures designed to preserve its precarious AAA credit rating, without which the euro zone might no longer be able to bail out its weakest members.

Finance ministers of the 17-nation currency area met in Brussels to try to accelerate the building of a firewall to shield solvent but stressed economies in Spain and Italy from the fallout of a potential Greek default. One euro zone official said: “We exhausted our scope for concern with Greece. The main concern of the ministers now is Italy and the leveraging of the EFSF.”

The Standard & Poor’s 500 Index climbed 0.6 percent to close at 1,261.12 at 4 p.m. New York time. The euro slipped 0.2 percent to $1.3765 after sinking 0.8 percent earlier. The Swiss franc slid on a report the central bank may weaken the currency. Ten-year U.S. Treasury yields lost less than two basis points to 2.02 percent after decreasing seven points earlier. Oil climbed to a three-month high, while gold surged to the highest price since September.

Italy’s 10-year bond yield trimmed gains after climbing as much as 31 basis points. The extra yield investors demand to hold Italian 10-year bonds instead of German bunds, the euro region’s benchmark government securities, widened to as much as 491 basis points, or 4.91 percentage points, the most since the introduction of the euro in 1999, before retreating from the day’s high to 488 basis points.

The Swiss franc fell against all 16 of its most-traded peers following a report that the nation’s central bank may move to weaken the currency. The franc slid 1.7 percent versus the 17-nation euro and lost 1.8 percent versus the dollar. Policy makers remain ready to act in case the franc’s strength increases the risk of deflation and threatens the country’s economy, Swiss National Bank President Philipp Hildebrand told NZZ am Sonntag newspaper in an interview conducted Nov. 2 and published yesterday.

Gold futures rose as much as 2.5 percent to $1,799.90 an ounce. The metal climbed 6.3 percent in October, rebounding from the bear market in the previous month that saw it drop more than 20 percent from the record $1,923.70 reached Sept. 6. In September, investors sold gold to cover losses during a rout in equity markets.

Bullion may rise to a record $1,950 by the end of the first quarter, according to the median estimate of eight of the 10 most accurate forecasters tracked by Bloomberg over the past two years. The metal has appreciated more than sixfold in its 11- year run of annual gains. Before today, gold climbed 24 percent this year.

Oil climbed to a three-month high in New York, rising 1.3 percent to settle at $95.52 a barrel. The MSCI Emerging Markets Index increased 0.2 percent, rebounding from an earlier 0.7 percent drop.