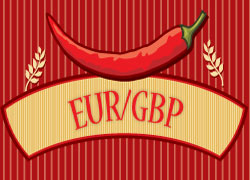 The EUR/GBP Adds Some Spice

On Tuesday, the EUR/GBP drifted up and down in a tight sideways trading range in the 0.82 big boy ranges. The pair held within striking distance of the key 0.8222/10 support area but a real test didn’t occur. That said, it remains significant that also EUR/GBP failed to record any gains on yesterday’s risk rally.  Intraday, the pair held near Monday’s highs in Asia, but came under moderate pressure from the start of trading in Europe.

The UK March CPI was reported at a 3.5 % (up from 3.4% and vs consensus of 3.4%). We don’t expect that this deviation will be a key factor in the BoE assessment. Nevertheless, GBP gained a few ticks upon the release.  The euro tried to regain some ground after the Spanish T-bill auction and the German ZEW survey but the move was almost immediately blocked. EUR/GBP settled in the 0.8230/55 area for the remainder of the session and closed the session at 0.8243, down from 0.8265 on Monday evening.

The eco calendar in Europe and in the US is very thin. The calendar in the UK is interesting. The UK labor market data will be published. Usually, this report is no market mover unless there is a wide deviation from consensus. At the same time, the Minutes of the previous BoE meeting will be published. This report has market moving potential. At the May meeting the MPC will have a new inflation report available and the latest tranche of the Asset purchases will be finished.

So, markets will be very keen to pick up any hints for the May decision. We assume that the voting pattern in April was the same as at the March meeting (2 dissidents in favour of more asset purchases).

We also assume that MPC won’t have changed its assessment on the economy and on inflation. If the bank would turn a bit more ‘worried’ on inflation (inflation declining slower compared to the anticipated path), this will be considered as diminishing the case for more QE.

To summarize: we expect the minutes to be more or less neutral for sterling but we see an outside risk for a sterling positive outcome.

Of late, we held the theory  that a high profile event is needed to clear important support. As long as this event doesn’t show up, EUR/GBP might stay in the current range near the recent lows. In addition, below the 0.8222/10 support, several other important support levels are lining up (0.8143, August 2010 low; 0.8068, June 2010 low).

So, the break, if any, might be more gradually compared to what might be the case for EUR/USD. So, it could take time for EUR/GBP to break clearly below this high profile level. Nevertheless, given the overall negative sentiment on the single currency, we don’t take profit on EUR/GBP shorts yet.