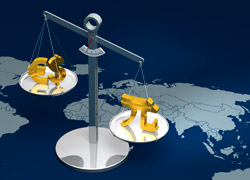 As Japan and China officials made statements today declaring that they’ll promote direct trading of the yen and yuan without using dollars and will encourage the development of a market for companies involved in the exchanges, the Yuan reached record highs in thin trading.

The significance of this announcement should not be overlooked, particularly as Brazil moved past the UK over recent days to become the sixth largest economy relegating the UK to seventh position with India and Russia due to overtake the UK based on current (projections) inside this decade. The threatening noises that emanated from the USA in 2011, with regards to trading embargoes and tariffs due to China’s appreciation of the Yuan versus the US dollar, will no doubt resume in intensity over the next few months.

Given the huge size of the trade volume between Asia’s two biggest economies, this agreement is much more significant than any other pacts China has signed with other nations.

Japan exported circa 10.8 trillion yen to China in 2011, and imported 12 trillion yen, according to Ministry of Finance data. The deficit with China widened to 1.2 trillion yen, from 418 billion yen in January-to-November 2010. About 60 percent of the trade transactions are settled in dollars, according to Japan’s Finance Ministry. China sold the second-biggest net amount of Japanese debt on record in October as the yen headed for a postwar high against the dollar and benchmark yields approached their lowest levels in a year. It cut Japanese debt by 853 billion yen, Japan’s Ministry of Finance said on Dec. 8.

The yuan closed up versus the dollar on Monday hitting an all-time high in intraday trading, fuelled by the stronger mid-point set by the People’s Bank of China. The yuan is expected to remain stable or rise slightly in the last week of the year to close 2011 near 6.30 versus the dollar, in line with market expectations. The currency is likely to appreciate in 2012 as China continues to post large trade surpluses despite a slowdown in exports. Spot yuan closed at 6.3198 against the dollar, up from Friday’s close of 6.3364, after hitting an all-time high of 6.3160. Its previous peak was 6.3294 hit on December 16.

The PBOC set the dollar/yuan mid-point at 6.3167 on Monday, stronger than Friday’s 6.3209 and near the record-high fixing of 6.3165 on November 4. The yuan has appreciated 4.27 percent this year most of the gain being recorded in the first 10 months of the year as China tries to rebalance trade and use the currency to help fight high inflation. The government halted yuan appreciation but is wary of a weaker yuan that could lead to capital outflows.

MSCI’s global index advanced 0.1 percent at 1:34 p.m. in New York. Financial markets from Hong Kong to the U.K. and the U.S. were closed for holidays on Monday. The dollar weakened 0.2 percent to $1.3074 per euro. The yuan touched 6.3160 versus the greenback, the strongest level since 1993, on speculation China’s policy makers will tolerate appreciation to stem capital outflows.

Japan’s Nikkei 225 Stock Average closed up 1 percent in the Monday session. The Dollar Index, which tracks the U.S. currency against those of six trading partners, fell 0.1 percent after sliding last week. The Australian dollar rose 0.1 percent to $1.0166. Gold for immediate delivery retreated as much as 0.5 percent to $1,597.75 an ounce before trading at $1,606.90 an ounce. Copper declined 1.2 percent to 55,200 yuan ($8,735) a metric ton in Shanghai, the first retreat in five days. The London Metal Exchange and Comex were closed on Monday.

There are no economic calendar data releases that may affect sentiment in the morning session.

« All Your Cash, Are Belong To Us Mario Monti Takes On The Italian Cash Society I'm All Lost In The Supermarket, I Can No Longer Shop Happily »