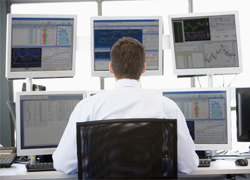 What should you look for in a home trading set up? When new traders enter the world of trading they have an idea in their mind’s eye of what trading should be like; trading should be a miniature version of the pre-conceived ideas they’ve developed by casting a look at traders in action on the television; bunches of monitors, traders shouting across a trading desk, sleeves rolled up, sweating brows, a highly charged environment of activity…

I often chuckle when watching the BBC 24hr news channel when it covers crucial financial news and they broadcast an opinion from an analyst. The analyst will generally position themselves with the trading floor activity occurring directly behind them, but you don’t see the activity ‘hive’ that many retail traders would imagine. In fact if you took away the analysts fronting the financial news questions, you’d quickly discover that the trading environment (in the modern day context) is incredibly quiet.

Unless the financial world is crashing to its knees, or a highly charged high impact news event has been released and it’s a complete ‘outlier’ to that predicted, trading environments, at least the ones I’ve spent time on, are fairly peaceful arenas. The majority of traders, analysts, marketing executives and work colleagues have ‘stuff’ to be getting on with. Many times they’ll need complete quiet, or at the very least no more than the normal ‘hum’ of activity. The environment that new traders imagine no longer exists, it’s a stubborn mental image and throwback to when the majority of trading was done over the telephone. Incidentally that’s when spreads of 20 pips were common place on cable, think back to the 1980’s…

It’s a curiosity why retail traders feel they require and aspire to a bank of 8 monitor set ups in order to trade, powered by an i7 computer, with 24gb of RAM, the best video card money can buy and rows 22″ LCD monitors. It’s also a wonder why many home traders fail to address the weakest part of their set up; their internet connection speed. There are many speed tests available on the web that traders can use from home in order to check what speed and connections they’re currently experiencing, and it’s incredible how overlooked this critical issue is, even by those traders who have spent a considerable sum investing in their home set up, as it really can be the weakest link.

But it’s the overkill and reasonable requirements that we want to address in this article; what does a retail trader really require to trade successfully from home?

Firstly, let’s address the ‘bank of monitors’ fallacy having identified why home traders believe its essential. Other than the pre-conceived ideas that we’ve already highlighted it’s also a vanity and a comfort issue. Traders like to project their success and prowess, further if they’re only trading from a smartphone can they really be ‘doing a real job’? Whilst traders (sensibly) want to give themselves every opportunity for success, and by investing in a bank of monitors set up they believe they’re giving themselves the best chance of success, and to be fair that’s actually not a poor decision in isolation.

So what equipment do we need to trade successfully?

I’m fond of stating that a robust retail trading strategy should be simple enough to be easily operated from anything from a smartphone to the i7 24gb set up mentioned earlier. And if your strategy can’t be executed on something as basic as a smartphone then perhaps you need to re-examine your strategy with focus on simplifying it.

We mentioned the ‘back in the day’ trading that took place in the 1980’s, traders also need to recognise what an incredible piece of kit the finest iPhone or Samsung smartphone is in the palm of your hand. The processing power is incredible versus what was available less than five years back, and more often than not the mobile devices, on the 3rd or 4th generation connections, are often faster than many up to date computers.

Brokers with their proprietary platforms and platform developers such as MetaTrader have invested billions to make their mobile platforms work. Mobile smartphones are more than capable of coping with the demands retail traders require. But if you do want to invest in a decent set up at home what should you look for?

Be honest with your requirements and set yourself a reasonable budget and avoid trading computer ‘shops’ whose inflated prices are an unnecessary trading tax. Also think what use the set up could be to any other family members; a set up to be used for trading only is a terrible waste, particularly if your PC has an excellent video card made by companies such as AMD/Radeon. If you’ve young members of the family they can have great fun on many PC games, particularly if you can stretch the image across your monitors, racing games will take on a whole new dimension.

3 monitor set up is all most traders require

I’d suggest that anything more than three monitors is excessive for home retail traders and perhaps the ideal. The starting point is you should be able to buy three 21″ LCD monitors for circa £80 each. Your PC can have the following as a minimum requirement for a surprisingly low outlay; a graphics card that supports up to 6 monitors, which allows you to stretch images across multiple monitors, will add an extra cost of £150 to your set up. The basic i5 PC with 16gb of RAM will be approximately £400, therefore your total outlay, before accounting for incidentals such as leads, which you may need specialist ones for your monitor set up, should be circa £800.

Now bear in mind that if you walked into a computer shop on the high street they’d be looking to take circa £1,600 off you for a similar set up, citing that their hard drives, graphics cards, memory cards etc. are state of the art and come with guarantees etc, “they’re not the usual boxes imported in crates from China” is the general refrain you’ll hear. Ignore it, you’ll get the best deals by searching on the web, or by searching on eBay, not for auctions, but for retailers that specialize in gaming machines. And it’s a PC of gaming quality you’re after, one that’ll cope superbly with the charting packages you’ll no doubt prefer.

We’re big on suggesting that you eliminate ‘trader’ stress at every opportunity, without a doubt a 3 monitor set up can reduce your trading stress, given that the modern LCD monitors are ‘kinder’ on the eyes over longer periods and the faster computer speeds, generated by the likes of an i5/i7 with 16gb RAM +, will allow you to zip through your charting package. Whilst your trading platform will undoubtedly look better and work smoother. And that’s the ‘honest’ limits you need to go to in order to have the best possible set up for the minimum outlay.

And if your 3 monitor set up has a graphics card, that allows what’s termed an Eyefinity configuration, then buy yourself a driving game such as Dirt to spend a few hours on, either by yourself or with the kids and a ‘shoot em up’ game will look great too. For those moments when the trading day hasn’t gone too well it can prove to be a great release and distraction….

« The US Treasury begins to warn Congress of the October deadline on raising the debt ceiling as govt only has $30 billion in reserves UK growth unexpectedly falls to 1.3% as USA debt fears continue to stalk markets »