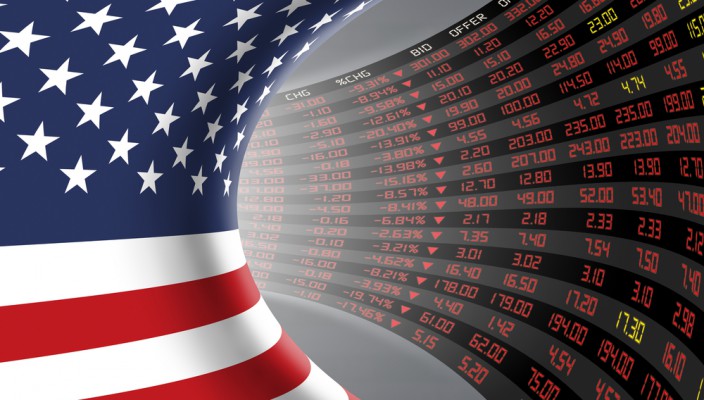 U.S. equity markets and overall investor sentiment, appears to have discovered an equilibrium position. The subjects of inflation, bonds, market valuations, and the U.S. dollar value, are no longer the overall concerns that caused the sudden sell off, witnessed in late January early February. Sentiment appears to be back to 2017 bullish levels, an example of which is the equity markets brushing off the shock collapse in new home sales, which were reported as -7.8% for January, missing the forecast for a rise to 3.5% and nearly matching the -7.6% fall for December. Market sentiment is once again simply ignoring any negative news, as investors look to bid up prices, but not based on fundamentals or technicals.

The DJIA rose by circa 1.58% and the SPX rose by 1.18%, taking the 2018 gains across both indices to circa 4%. The U.S. dollar rose by approx. 0.2% versus the majority of its peers, whilst the dollar index rose by a similar amount. WTI oil approached the $64 per barrel handle, as a Libyan production issue has caused a potential shortage, whilst gold reached an intraday high of $1,240 per ounce, before giving up the safe haven appeal gains, to close out the day at $1,326.

European equity markets also moved ahead during the day’s trading sessions. The FTSE, DAX and France’s CAC all rose. The economic calendar news relating to both the U.K. and the Eurozone was scarce, however, the U.K.’s BBA published increased numbers of loans for house purchases, and Mario Draghi conducted a conference in Brussels in which he discussed the monetary policy for the Eurozone and the impact on wider Europe. Politically, the subject of Brexit was once again high on the agenda, as the leader of the opposition in the U.K. Jeremy Corbyn stated that the Labour Party would insist on the U.K. staying in the customs union to ensure that trade barriers remained frictionless and border issues regarding Northern Ireland would be solved.

The news caused the U.K. pound to oscillate, shortly after a Bank of England official suggested in the morning that a base rate rise may happen as early as May. The issue facing the U.K. government is now extremely difficult, as many in the Conservative party may consider aligning with the Labour Party and voting against their own government to agree the final Brexit deal. This could seal the end of the party’s current governance and cause a general election, by way of a vote of no confidence.

EUR/USD whipsawed through a wide range throughout the day, rising up through R2 to reach an intraday high of 1.2355, before reversing direction to collapse back through both levels of resistance, and breach the daily PP, threatening to reach the first level of support. Price eventually recovered to close out the day up circa 0.2% on the day at 1.231. EUR/CHF developed a strong daily trend, trading in a wide bullish trend, taking out the second level of resistance, to close out the day up circa 0.8% at 1.154. CHF struggled to make gains versus any pairs, during a risk on trading environment.

GBP/USD whipsawed in a wide range throughout the day, initially rising up through R2 to post an intraday high breaching the 1.400 handle. Price reversed direction to fall back through the daily pivot point, to eventually close out near to the PP at 1.396. Sterling experienced oscillating and whipsawing behavior versus many of its peers, GBP/JPY providing the most prominent example. Early in the Asian session the security rose through R1, fell back through the daily PP, and rose to just reach R2, to then reverse direction and close out up 0.2% on the day.

XAU/USD rose strongly in the Asian and European sessions, rising up through R3 to reach a three day high of 1,340. However, the rise was temporary as the price fell back close to the first line of resistance at 1,333. Price is still significantly up on the 1,308 February low, but still short of the yearly high of 1,361 printed on February 18th.

After the German Bundesbank (the central bank of Germany) delivers its latest annual report, we’ll receive the last German CPI inflation rate, which is forecast to fall to 1.5% YoY for February, from 1.6% in January. The Bundesbank report could impact on the value of the euro, depending on the content.

It’s an extremely busy day for USA calendar news, both the advanced retail sales and durable sales figures, will deliver an indication regarding the appetite for Americans to purchase retail items, particularly large ticket goods such as white goods. The most notable house price index, the Case Shiller index, will reveal how house prices have held up over recent months, this will also reveal the overall sentiment of USA consumers, as will the latest consumer confidence reading.

The outstanding calendar event of the day concerns the testimony the new Federal Reserve chair Jerome Powell will deliver to the House Financial Services Committee. Investors and analysts will monitor this appearance and speech for a variety of reasons, including any monetary guidance, forward guidance clues. The overall confidence and competence he displays will also be scrutinized.