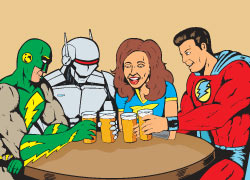 The Super Committee Isn’t Too Super Is It?

“Failure among the super committee to reach an agreement could send the S&P 500 down 9.5 percent from last week’s closing level to 1,100, The failure would reflect poorly on Congress. It would showcase as was the case in August the inability of elected officials to act in the long-term best interest of all Americans.” – Goldman Sachs Group Inc. equity strategist David Kostin.

“After months of hard work and intense deliberations, we have come to the conclusion today that it will not be possible to make any bipartisan agreement available to the public before the committee’s deadline,” – panel co-chairmen Representative Jeb Hensarling of Texas and Senator Patty Murray of Washington.

A special debt-reduction committee in the U.S. Congress has failed to reach agreement, extending the deeply entrenched partisan gridlock into the 2012 election year and setting the stage for the $1.2 trillion in automatic spending cuts.

Both parties have blamed each other for the stalemate, Democrats saying Republicans wouldn’t relent on taxes and Republicans accusing Democrats of rejecting an offer to raise revenue along with spending cuts. Some lawmakers were already looking at ways to lessen the effects of the across-the-board cuts triggered by the panel’s failure that will begin in 2013.

USA AA+ Rating
Standard & Poor’s said it would keep the U.S. government’s credit rating at AA+ after a congressional committee that was supposed to break partisan gridlock and cut the budget deficit didn’t reach an agreement.

S&P stripped the U.S. of its top AAA grade on Aug. 5, but decided that the supercommittee’s failure didn’t merit another downgrade for the country because the failure will trigger $1.2 trillion in automatic spending cuts. While the firm expects the Budget Control Act to “remain in force,” easing those spending limits may cause “downward pressure on the ratings,” S&P analysts Nikola Swann and John Chambers said today in a statement.

The S&P 500 Index of U.S. stocks plunged 6.7 percent on the first trading day after the downgrade, while government bonds rallied as investors sought safety.

Market Overview
The Standard & Poor’s 500 Index lost 1.9 percent to close at a six-week low of 1,192.98 at 4 p.m. in New York. The MSCI All-Country World Index sank 2.3 percent in its first six-day slump since August. Yields on 10-year Treasury notes fell four basis points to 1.97 percent, while the cost of insuring against default on European government debt approached a record high. The euro slipped 0.2 percent to $1.3496 after weakening as much as 0.7 percent. The Dollar Index rose 0.3 percent.

The S&P 500 extended last week’s 3.8 percent decline, its worst drop in two months. Stocks maintained losses even after the National Association of Realtors said sales of previously owned homes in the U.S. unexpectedly rose 1.4 percent to a 4.97 million annual rate, a sign falling prices may be luring buyers into the market.

Europe
The Stoxx Europe 600 Index sank 3.2 percent, extending last week’s 3.7 percent decline, as almost 45 stocks dropped for every one that rose. All 19 industries in the benchmark measure retreated more than 1.8 percent, with mining stocks falling 6.1 percent to lead the drop.

The cost for European banks to fund in the U.S. currency climbed to the highest since December 2008. The three-month cross-currency basis swap, the rate banks pay to convert euro payments into dollars, increased to 139 basis points below the euro interbank offered rate, from 130 at the end of last week.

Bank of America
Bank of America Corp. dropped the most in the Dow Jones Industrial Average and touched levels last seen in March 2009 as investors speculated on how much faulty mortgages will cost the lender.

Bank of America fell 5 percent to $5.49 at 4:01 p.m. in New York, the lowest since March 11, 2009. The shares are down 59 percent this year, the worst showing in the 24-company KBW Bank Index. Faulty mortgages and foreclosures have already cost the Charlotte, North Carolina-based bank about $40 billion since 2007, according to data compiled by Bloomberg.

« Are We Being Fooled By The Randomness Of Forex Markets When Chaos Theory Exists? Ctrl+Alt+Del »