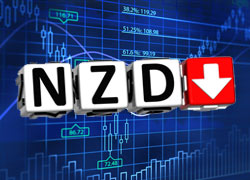 The Kiwi This Week

The New Zealand dollar fell as investors await more evidence of the pace of global growth, including Chinese manufacturing and US consumer confidence and durable goods orders. The New Zealand fell to 81.60 US cents at 5pm from 81.65 cents at 8am and 81.88 cents at the close of New York trading on Friday. The trade-weighted index decreased to 72.72 from 72.88.

Two strong economic reports were released today, which should have sent the kiwi upwards.

New Zealand’s trade balance was back in surplus in February, though the government statistician said weaker than expected imports and exports may have been impacted by escalating industrial action around the country. The trade balance was a surplus of $161 million in February, turning from a revised deficit of $159 million a month earlier, according to Statistics New Zealand.

That was in line with the predicted surplus of $153 million in a Reuter’s survey of economists.

A new survey shows economic confidence dipped in the first three months of the year, with a gap between the major dairy production areas and the rest of the country. The quarterly Westpac McDermott Miller Regional Economic Confidence survey showed net confidence fell from 6% positive at the end of 2011 to 3% in the March survey.

The figures in the survey represent the net difference between those who expected good or bad economic times in their region over the coming year, with a score of zero representing a balance between optimists and pessimists.

Chinese manufacturing figures this week are expected to show declining activity in the world’s second-biggest economy, after  the HSBC Flash PMI, a lead indicator of factory activity, raised expectations of a harder than expected landing.

In the America’s on Tuesday, the Conference Board’s gauge of consumer confidence is forecast to be 70 this month, according to a Bloomberg survey, near the one-year high of 70.8 reached in February. Durable goods orders in the US probably rebounded from their decline in February.

The Dollar Index, a measure of the greenback against a basket of currencies, fell 0.5% to 79.36 on Friday in New York after US home sales unexpectedly fell in February. That sparked fears the US recovery may not be as embedded as previously thought after a string of upbeat data prompted traders to start betting on an earlier Federal Reserve rate hike than the end of 2014. “US data momentum looks like it’s turning lower, which should push the US dollar down,” said Imre Speizer, market strategist at Westpac Banking.

The pull back last week looks like a correction on the prior rally and the kiwi looks like its multi-day trend is upwards.New Zealand merchandise trade showed a surplus of $153 million in February, though weaker import and export volumes may have been impacted by ongoing industrial action at Ports of Auckland. People are focusing on US and Chinese data, with the speed of America’s recovery slowing and China’s economic activity winding down. The New Zealand dollar fell to 77.99 AUD from 78.18 AUD last week, and was little changed at 67.44¥ to 67.40¥. It declined to 61.53€ from 61.69€ last week, and dropped to 51.54£ from 51.59£.