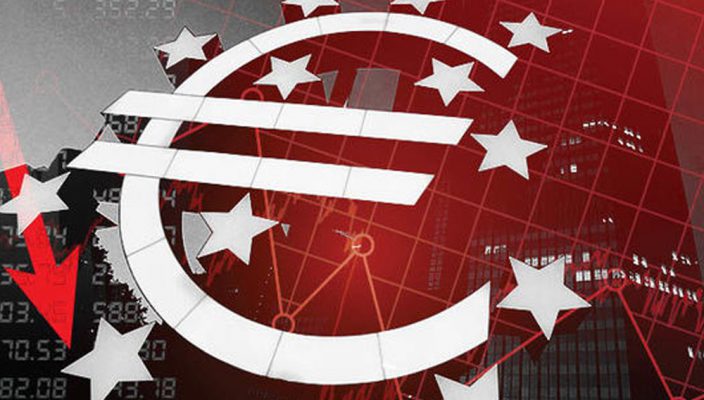 The economic downturn in the eurozone intensified in January as renewed restrictions aimed at curbing the coronavirus’s spread hit the bloc’s dominant services sector hard.

Coronavirus cases are on the rise again, and governments across the continent have resumed harsh isolation measures, stifling public life and forcing hospitality and entertainment establishments to close their doors.

Risk sentiment is deteriorating while the America’s stimulus package may further help the US Dollar to gain strength against its rival currencies.

The final January IHS Markit PMI, considered a good indicator of economic health, fell to 47.8 from December’s 49.1 but was just above the preliminary 47.5. A reading below 50 indicates contraction.

Chris Williamson, a chief business economist at IHS Markit said that the eurozone economy experienced a predictably difficult start through 2021 as ongoing efforts to contain the spread of COVID-19 continued to negatively impact business activity, especially in the services sector.

The service business activity index fell to 45.4 in January from 46.4 in December but was higher than the preliminary value of 45.0. On Monday, Manufacturing PMI showed that growth remained robust at the start of the year, but the pace slowed down.

He further added that production growth continued to help offset some weakness in the services sector, although even here factories saw a slowdown in production growth amid weak demand and supply delays often associated with the pandemic.

Thus, GDP contraction looks likely in the first quarter, although on current trends it should be modest compared to the decline seen in the first half of 2020.

The bloc’s economy contracted 0.7% in the last quarter, officials said, and a January Reuters poll showed it would take up to two years to return to pre-COVID-19 levels.

It is not surprising that after the closure of the sites, the demand for services fell. The new business index fell to 45.4 from 46.6, even though it beat the preliminary estimate of 44.7.

Because of hopes that the vaccines being introduced will bring some return to normalcy, overall optimism for the coming year remained robust. The Composite Index of Future Issues only dropped to 64.2 from 64.5 in December, the highest since April 2018.

The EUR/USD pair is trading lower on the day for second consecutive trading session. This has been the 9-week low that pair hit with further weakness to prevail in the short run. The pair has marked the lows near 1.2000 handle on Wednesday ahead of New York session. The one-hour chart suggests bearish trend as the price lies below the key 200 hour moving average (1.2120). The 4-hour chart also tells the same story. As long as the price stays below key levels, the outlook will be considered bearish.

« US and European markets rally on Tuesday, USD continues its current momentum trend versus its main peers Equity and currency markets trade in narrow ranges due to inconclusive calendar data »