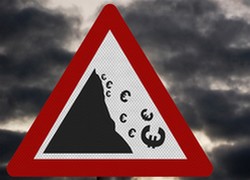 The Euro Has Fallen 8.5 Percent Versus The Dollar Since October

Jan 16 • Between the lines • 2254 Views • Comments Off on The Euro Has Fallen 8.5 Percent Versus The Dollar Since October

The habit of the rating agencies is to announce serious downgrade information on the last trading day of the week, more often than not they’ll encourage the market to adjust to the imminent news (by way of rumors and or leaks) and then deliver the blow once the markets have closed, presumably this is so supposed ‘cool heads’ can survey the potential for damage and get their scripts together for the following week. As an aside questions really need to be asked with regards to these leaks, given the huge spikes caused in the forex markets by these rumors, which are then generally substantiated.

After the French down grade, amongst the cluster announced after European markets closed on Friday, Sarkozy appears to have gone into hiding, this despite warning his fellow French citizens, in a bizarre untraditional New Year address, that the coming year would represent an extreme economic test for France. Instead it was left to France’s prime minister and economic ministers to engage in an alien hybrid of a public relations exercise and damage limitation.

Chancellor Merkel took a different approach to Sarkozy as did various members of the German cabinet. Merkel played the impact of the euro-wide downgrades down, insisting that the news was imminent and as such the impact will be contained. This week will determine if that belief has foundation. Investors did ignore S&P last year when it cut the U.S. to AA+ in August as the world’s largest provider of credit analysis argued that the failure up to then of Democrats and Republicans to agree on budget cuts made the U.S. less creditworthy.

Seven weeks after the downgrade, the yield on the benchmark U.S. government bond actually fell to a record 1.6714 percent. One major difference with the France is that the U.S.A. admin. was and is always ready and prepared to print itself money to alleviate the problem, in simple terms, despite it being inflationary, this makes it easier for the world’s largest economy to pay its debts, the European Central Bank does not have that luxury or remit, preferring tighter fiscal discipline as a solution..

Downgrades
France and Austria lost their top credit ratings in the string of downgrades on Friday evening that left Germany as the euro area’s only stable AAA grade, Standard & Poor’s warned that crisis-fighting efforts are still falling short. France and Austria were cut one level to AA+ from AAA facing the risk of further reductions, the rating company stated in Frankfurt. Finland, the Netherlands and Luxembourg kept their AAA ratings but were put on negative watch. Spain and Italy were also among the nine nations downgraded.

The first measurement of the report’s impact will be visible when France sells as much as 8.7 billion euros in bills at a debt auction. Yields may not rise much, at least initially. Ten-year yields for the nine sovereign borrowers that lost their AAA ratings between 1998 and the U.S.’s downgrade in August rose an average of two basis points in the following week.

The Euro
The euro slumped for a sixth week, this is now the longest stretch of losses versus the dollar since 2010, as the stripping by France’s top credit rating by Standard & Poor’s magnified concern the region’s financial turmoil will intensify. The shared currency also slid for a third week versus the yen and fell against the majority of its most-traded peers after negotiations between Greece and its creditors were put on hold. Currencies of commodity-producing countries rallied amid bets China’s central bank will ease credit conditions. U.S. inflation rose in December, a report next week may show.

The euro fell 0.4 percent over the past week against nine developed-nation peers tracked by Bloomberg Correlation-Weighted Currency Indexes. The New Zealand dollar rose 2 percent in the best performance, while the Swedish krona was the biggest loser with a decline of 0.9 percent.

The franc rose to the strongest versus the euro since September after investors tested the bank’s cap of 1.20 francs per euro. The SNB said in a statement the limitation, imposed in September to curb the currency’s strength, “remains unchanged. The Swiss currency rose 0.6 percent this week to 1.2076 per euro and touched 1.2063, the strongest level since Sept. 20.

COT Report
Futures traders have increased their bets to a record high that the euro will decline versus the dollar. The difference between bets that the shared currency would fall versus those that it would rise, (net shorts) surged to 155,195 in the week ended Jan. 10th, according to data from the Commodity Futures Trading Commission released on Friday.

Could European equities fall by ten percent?
European equities may drop as much as 10 percent due to concerns that the region’s sovereign-debt crisis will harm the economy, before recovering in the second half of 2012, according to Goldman Sachs Group Inc. The Stoxx Europe 600 Index might decline to 225 in the next three months, the bank stated at it’s Friday and weekend Global Strategy conference in Zurich. They expect the gauge to recover in the second half of the year to close at 250 to 270, a gain of as much as 20 percent from their predicted trough.

There are no significant economic calendar releases that could affect sentiment in the morning session.

« Sshhh – It's Time To Discuss The Forex Cheat Sheet Is The UK Back In Recession? »