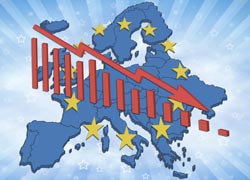 The Effects Of The EU Mess On The EUR/GBP

Sentiment on risk remained fragile and EUR/GBP tested offers just in 0.8000 areas in thin Asian trading conditions. Nevertheless, as was the case several times of late the euro tried to move away from the lows and EUR/GBP joined this move. Usually the UK PPI is not a market mover.

Produces price came out below the market consensus and the ONS also indicated a deeper slump in construction than reported earlier. This could have a negative impact on Q1 GDP of 0.1%. These data raised questions whether the BoE will be able to stick to its decision not the raise the amount of asset purchases. Whatever, the data provided a good excuse to take some profit on standing EUR/GBP shorts.

EUR/GBP filled offers in the 0.8045/50 area. However, with the euro under pressure overall, there was no strong enough momentum for the pair to regain Thursday’s top in a sustained way. EUR/GBP closed the session at 0.8038, compared to 0.8013 on Thursday.

Today, the calendar in the UK is empty. So, sterling trading will again be driven by global market sentiment and by the headlines from Europe. The euro is again ceding ground this morning and so does the EUR/GBP cross rate. For now, we don’t see any reason to row against the tide as sentiment on the euro will probably remain negative short-term.

That said, we turn a bit more cautious on sterling. After the recent poor UK eco data, markets will look out whether the inflation report might keep the door open for a restart of the programme of asset purchases. This might at least temporary cap the upside of sterling against the euro. Short-term players can consider partial stop-loss protection on EUR/GBP shorts.

Of interest is the emergency meeting called by the EU Finance Ministers, The theme of the meeting will certainly be the situation in Greece and its fate inside EMU. Over the week-end, EU president of the Commission, Barroso, suggested Greece would have to quit the euro if it doesn’t follow the rules of the euro (pacts, bailout programme).

There were other influential sources that put Greece for the choice to abide with the rescue programme or face default and exit. We think Greece will prominently be present at the Eurogroup discussions and while not made public, there should be a plan B on preparation. So, the comments afterwards might be interesting.

Also markets will also keep an eye on the Spanish plan for the banking sector. Will Spain be able to put in place a credible plan to overhaul its banking sector while at the same time not putting at risk the sustainability of Spanish government finances? This is no easy exercise and the report might be vulnerable to all kinds of critics. Last but not least, the formation of a Greek government will also continue to figure in the headlines. The talks are on-going, but at least for now there is no indication that a workable compromise is in the making.

We could see the euro plunge to new lows. Which could be of great benefit to the Sterling.