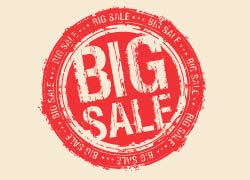 The ECB Announces The Last Of Its Blow Out Money Sales

We’re not entirely sure what happened to the “on deposit” stories that were doing the financial news-rounds in late 2011, remember how it was?

The ECB would offer three year virtually unlimited loans to banks at a 1% coupon, they termed it LTRO, (long term refinancing operation). The banks would then immediately deposit the same borrowings with the ECB as they distrusted their counter parties that much they couldn’t possibly lend it to them by doing you know, normal clever ‘banking stuff’.

Therefore the perfect symmetry and social uselessness of the desperate insolvent banks, who scrambled over each others’ rotting zombie like corpses for the loans, was contained in a perfect if not surreal loop; central bank lends at 1%, bank gives it back on deposit to earn (at best) 0.5% interest, that’s banking for you, in the ‘new paradigm’ 2011-2012 style.

The ECB has announced that the window is closing, the next auction (the second) will be the last and if the total lent is the rumoured one trillion euros then the ECB’s plan may work. Supply may exceed demand, they may not be able to give the money away suggesting that the system is healed. That’s if by healed we judge that the banks will be that awash with liquidity therefore solvency should not be an issue…at least for a year or two..

The ECB wants to keep pressure on governments to improve their defence of the euro zone with better economic policies and by bolstering their European Stability Mechanism (ESM) firewall which will come into being by mid-year. Making hundreds of billions of euros easily available to banks over a three-year period risks fuelling a credit binge that some central bankers worry could increase inflation whilst fostering a central bank dependency culture. Some at the ECB believe banks should now be redoubling their efforts to raise fresh capital, as UniCredit recently did through its rights issue, and fear the ECB’s help will create zombie banks reliant on central bank support;

If you are flooding the market with cheap refinancing then there comes a point when you are preventing the market from working, because nobody is going to borrow from another bank at X percent if they can borrow from the ECB at Y percent.

The ECB channelled nearly half a trillion euros in cash at the first operation on December 21. A Reuters poll of over 60 economists showed a mid-range expectation for it to allot another 492 billion euros next week, some analysts expect a trillion to be taken.

If banks used the first LTRO to plug their funding needs and fend off a credit crunch, ECB officials hope they could use the second more aggressively to buy higher-yielding bonds, especially from Italy which needs to recycle circa €105 bn of bonds before the end of April.

While ECB officials expect the second LTRO to give a boost to lending as well as bond-buying, they are nonetheless worried about banks becoming dependent on the ECB or heightened liquidity provision leading to irresponsible banking decisions.

Market Overview
U.S. equities shed their earlier session gains, a surge in oil dragged down transportation and consumer shares while Greece’s approval for a second bailout failed to spur enough confidence to keep the Standard & Poor’s 500 Index at an almost four-year high.

The S&P 500 rose 0.1 percent to 1,362.21 at 4 p.m. in New York after earlier climbing as much as 0.5 percent to top its highest closing level since June 2008. The Dow Jones Industrial Average shrank its earlier advance after climbing above 13,000 for the first time since May 2008. The Stoxx Europe 600 Index lost 0.5 percent. The 10-year U.S. Treasury yield jumped six basis points to 2.06 percent. WTI Oil reached a nine-month high near $106 a barrel as Iran said it stopped selling to France and Britain.

Commodity Basics
Iran stopped selling oil to France and Britain on Monday, preempting a European Union ban. EU nations bought a combined 18 percent of Iran’s exports of crude and condensates, or 452,000 barrels a day, in the first half of 2011, according to the U.S. Energy Department. France purchased 49,000 barrels a day and the U.K. 11,000 barrels.

Brent oil for April settlement increased $1.63, or 1.4 percent, to $121.68 a barrel on the London-based ICE Futures Europe exchange.

Forex Spot-Lite
The Dollar Index, which tracks the U.S. currency against those of six trading partners, fell 0.3 percent. The Australian dollar weakened against all 16 of its major counterparts, losing 0.8 percent versus the U.S. currency, after minutes of the nation’s most-recent central bank policy meeting showed there is scope for monetary easing.

« Americans Are Driving Less And Flying Less, Are They Finally On The Road To Nowhere? Greeks Refuse To Lie Down And Take The Austerity Medicine »