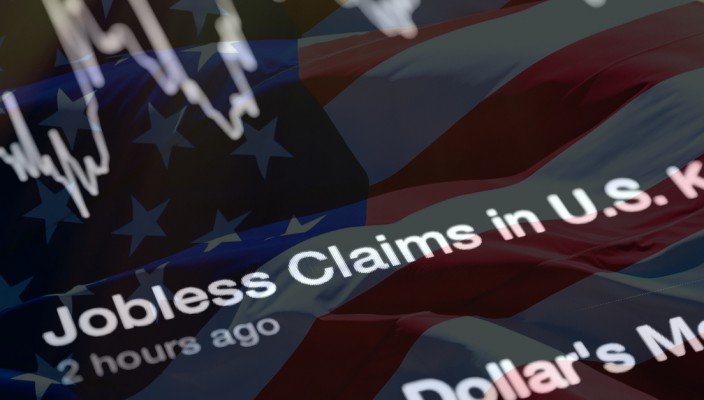 The main equity markets in the USA rose for the second day in series on Thursday to reach record highs in anticipation of the Pandemic Relief Bill finally getting approved.

The USA is not experiencing any form of unified coronavirus lockdown, it varies state by state. But to all intents it’s business as usual in The States, despite the US recording over 3,600 extra Covid deaths on Wednesday combined with a record number of positive cases.

So, when the BLS revealed that the weekly unemployment claims reached 885K last week, alarm bells should be ringing. But equity markets are so decoupled from the reality of life in USA cities and suburbs, that fundamental economic data has little effect.

The US has approximately 25m adults claiming out of work benefits, that’s close on 20% of the workforce, and the work-participation rate is at lows not seen since the Great Recession. The stimulus of approximately $3 trillion already provided by the Fed and US Treasury appears to have boosted stocks but left ordinary workers adrift.

The question should arise “just how long can this dislocation continue?” But even if it’s asked analysts would question the relevance because if stock markets begin to fall again, then more stimulus gets provided to prop them up. That’s the current pattern; save the financial markets at all costs, they must come first, ahead of the people.

It’s the American people who suffer more when a zero-interest-rate policy delivers a zero return on their dollar savings. While their domestic currency continues in freefall versus its peer currencies inflation will eventually rise. The goods bought in shops also get costlier because a lower dollar equals more expensive imports.

Both JPY and CHF provide a good indication of the continual safe-haven appeal of certain currencies and how far USD has collapsed. That collapse is illustrated by EUR/USD up 0.60% on the day and 9.80% year-to-date while trading at a high not seen since May 2018.

GBP/USD also rose on the day, reaching a two-year high, the currency pair fell through the 50 DMA last week but has recovered strongly since. The price traded in a range between R1 and R2 and up 0.56% on the day up 2.05% on the week. Naturally, the value will fluctuate until a definitive end date for Brexit negotiations gets confirmed. The EU stated on Thursday that the negotiations must end on Sunday evening.

Analysts and traders have heard these “final, and really we do mean final this time” statements so often over the past twelve months they’ll most likely ignore them. Bets are no doubt getting placed that no ultimatum occurs on Sunday because neither party wants to make one. What happens on January 1 when the UK is supposed to leave is anyone’s guess. There are nine working days left (not including Xmas holidays) to organise a deal, and there’s no sign of panic.

Gold continued its recent rally during Thursday’s trading sessions, the precious metal’s price breached R3 at one stage during the New York session and re-took its position above the 50 DMA closing out the session up 1.11% and 23.33% YTD. Silver was up 2.56% on the day and 44.09% YTD at $25.93 per ounce.

The UK ONS will deliver the latest retail figures for the UK from November’s trading. The forecast is for a monthly fall of –2.8% and a YoY rise of 3.2%.

UK consumers have engaged in their favourite pastime (mainly by online shopping) during the pandemic months. However, that spending can only be supported by jobs in supporting viable industries, and the CBI industrial trends orders are forecast to fall to come in at –27. Perhaps the UK chancellor had early sight of this data, as he extended the furlough scheme by another month to April 2021. The fear is that if he takes the jobs support scheme away from the 5.5 million workers currently on it, UK unemployment will rise by 2 million or more inside weeks. He could be inadvertently creating hundreds of thousands of zombie firms.

« Why you should trade FX instead of equities or cryptocurrencies WEEKLY MARKET SNAPSHOT 21/12 – 24/12 | HOW WILL THE MARKETS FOR STOCKS, FX AND COMMODITIES BEHAVE DURING XMAS WEEK? »