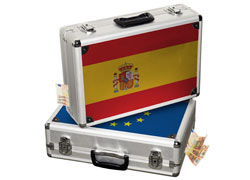 The yields on Spanish bonds fell today but markets were cautious as the cost of the country’s borrowings hit four-month highs earlier this week. The interest rate a country pays to borrow on international debt markets, which is also an indicator of risk, for the country’s 10-year-bonds dropped to 5.87pc in the secondary market from 5.93pc on Tuesday.

There is growing concern about Spain’s ability to cut its national debt and pull itself out of recession at a time when unemployment is at over 20pc.

These concerns prompted Prime Minister Rajoy to address the issue but he also said that Spain will not need a bailout. He said the country’s problems are “difficult and complicated” and added:

The government’s economic policies are tough and costly and will not produce results in the short term but they are what we have to do in these moments.

The stifling effects of the Spanish government’s austerity measures have prompted panic selling of Spanish debt, with sceptics questioning whether Spain will be able to avoid a further bailout, even with a whopping 27bn Euros of tax and cuts.

Many believe those measures are actually making things worse, hampering the country’s ability to pull itself out of the mess. And just to think Italy waits in line, Portugal is coming around for thirds and perhaps Greece will be back in line soon.

It’s certainly not looking good. Spain’s Prime Minister, Rajoy has warned there’s no alternative to austerity – this when unemployment’s already up to 23% overall, rising to 50% amongst young people. Meanwhile central bank governor stoked the panic further, saying the banks will need a new bailout. Interest rates on 10-year Spanish bonds hit 6% for the first time since January, while stocks fell to a three-year low.

You can’t really blame investors for any nervousness. Greece is one thing, but when you’re dealing with a crisis in the eurozone’s fourth-biggest economy it’s definitely panic time.  There are also concerns about the cost of Italian borrowing but the focus remains mainly on Spain where the major weakness lies.

German finance ministry spokesman said it was unfortunate that the markets are not factoring in reforms carried out in Spain. A rally triggered by more than $1 trillion of European Central Bank loans to the region’s financial institutions to stave off a credit crunch is running out of steam and, while Italian Prime Minister Mario Monti is pressing ahead with an economic overhaul, Mr Rajoy is failing to meet deficit targets amid a worsening recession. Spanish bonds fell pushing the yield on the 10-year benchmark bond to the highest since December 12 at 5.79pc, and widening the spread with similar-maturity German bunds to more than four percentage points.