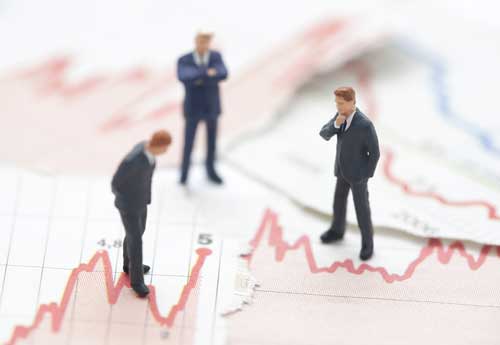 US equity markets closed the week out down during last Friday’s New York trading session. Investors and analysts took on board data revealing that both US consumer sentiment and retail sales are falling.

Retail sales in the US slumped by -0.7% in December, after the -1.7% fall in November. The highly respected University of Michigan sentiment reading missed the Reuters forecast coming in at 79.2 from the previous 80.7 reading. Consequently, the SPX 500 ended the day -1.10% down and the NASDAQ 100 -1.01% down, as both indices ended the week in negative territory.

Crude oil fell by 2.9% and traded just above the $52.00 per barrel handle, as inventories rose in the US, indicating an economic recovery based on increased transport, manufacturing, and industrial production is currently a pipe dream.

Investors and market participants will focus on earnings this week

Analysts, traders and investors are now forensically analysing the upcoming earnings reports to justify the spectacular rise in equity markets during Q4 2020. This earnings’ season could also affect USD’s value versus its peers.

Market sentiment will be affected by a smooth presidential transition

Joe Biden becomes the 46th president of the United Staes of America on Wednesday 21. He’s already begun to outline some of the policy changes he intends to enact, and he’s wasted no time in rowing back some of Trump’s most divisive policies.

The Iran nuclear deal becomes reactivated, home repossessions will have a moratorium, many (supposed) illegal immigrants will get citizenship, and the Paris climate change accord will be honoured. The $1.9 trillion stimuli will also begin, with a significant proportion aimed at the lowest paid and most impoverished.

Historically, the build-up to a presidential inauguration is a bullish occasion for market sentiment. In Washington, market commentators and police officials are concerned about social media chatter regarding further extreme right-wing protests planned for Wednesday. Hopefully, the process passes with little disruption, and the opposition finally begins to accept the election result.

Biden has more power than the Obama Democratic administration; his party now holds the balance of power in both the Senate and Congress. He and vice-president Harris have indicated that they intend to rush through policy change ASAP.

Some policy changes could negatively affect equity markets, such as fairer taxation and a clampdown on avoidance and evasion. Other policy like a massive infrastructure stimulus could generate genuine trickle-down economic benefits for all US citizens.

The dollar index DXY is up approximately 1% year-to-date in 2021. Versus CHF and JPY, the globe’s reserve currency is up close on 0.60% YTD. Versus GBP it’s up 0.73% and versus EUR up 1.16%. USD is flat versus AUD and up marginally against the Kiwi dollar NZD. The USD rise has continued despite the Fed and Jerome Powell (the Fed chief) insisting the central bank pushes an accommodative monetary policy throughout the COVID-19 crisis.

Once the London and European markets open, the Chinese economy’s latest GDP figures will be published. Asian markets will have reacted to the various metrics, and if the data is bullish, that optimism may extend to European and US markets throughout the day. In the afternoon the Bank of England governor Andrew Bailey will speak. GBP will come under scrutiny as the governor is likely to cover subjects such as the inevitable double-dip recession, the continuing impact of Brexit and what stimulus measures the BoE committee will put in place to prevent the deepest recession experienced in over 300 years worsening.

« Going straight to a straight-through processing FX broker is the right process Are you thinking of becoming self-employed? Then FX trading might be for you »