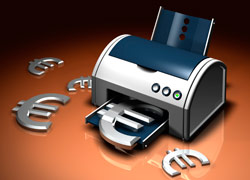 Let’s shift the current focus and concentrate on the UK’s financial ills, as opposed to the E.U.’s or the USA’s. The UK’s mainstream media have adopted a rather ‘Olde Englishe’ smug and arrogant attitude towards the travails of the E.U. over recent weeks. The spin, that the lowest common denominator U.K. press outlets put on David Cameron’s recent tete a tete with Angela Merkel in Brussels, was fascinating to read. The translation of the meetings suggested the UK were lecturing and educating the E.U. and the ECB over how the current crisis should be dealt with, the truth was as distant from this public relations delusion as could be possible.

Having had licence to print its way out of difficulty, through quantitative easing by the U.K.’s Bank of England, (who also stepped in to rescue its banking system independently of the E.U. and ECB), an argument could be put forward that the UK got ‘ahead of the curve’ in managing its own insular crisis. However, it left scars on the U.K. economy that are still deeply embedded in the system. When a respected former senior Minister of previous Tory governments suggests it’s now time for the U.K. to join the Euro, just as a senior German minister echoes those sentiments, perhaps it illustrates just how difficult a situation the U.K. may find itself in, whether or not they’re members of the seventeen nation shared currency.

Conservative peer Lord Heseltine claimed Britain will join the shared currency. The former deputy prime minister, a long-time supporter of the single currency, said the public had “no idea” of the potential impact its collapse would have on the UK. But he believes Franco-German “determination” will secure the euro’s future and pave the way for Britain to sign up. Lord Heseltine, who now heads up the government’s regional growth fund, told BBC1′s Politics Show on Sunday:

I think we will join the euro. I think the chances are the euro will survive because the determination, particularly of the French and the Germans, is to maintain the coherence that they have created in Europe. Now they have got a hell of a problem, let’s be frank about it, but my guess is that they will find a way through. I hope they will because the downside for the British economy of the euro going under is catastrophic. People have no idea of the scale of money British banks are owed by European banks. If the European banks start going it will be our banks that are on the line, our government on the line.

Many hard line Eurosceptics within the current U.K. government will have choked on their Sunday breakfast hearing this, they’d hoped this crisis would create an opportunity for the right-wing cabal within the U.K. coalition government to push their separatist agenda. Never in their wildest dreams (of a potential E.U. break up) did they expect further integration to be widely discussed and so openly, particularly during a time of crisis by such senior and respected voices.

Germany declared last week that Britain would be forced to scrap the pound and join the euro as David Cameron returned home empty-handed from crisis talks in Berlin. In a highly-provocative intervention, German finance minister Wolfgang Schauble suggested the UK’s struggling economy meant the pound was doomed, and urged the Prime Minister to back Europe’s ailing single currency. Mr Schauble said the euro would emerge stronger from the current crisis, leaving Britain on the sidelines unless it signed up. He said Britain would be forced to join ‘faster than some people on the British island think’ despite a pledge by Mr Cameron never to do. Jean-Claude Juncker, head of the powerful Euro Group of eurozone finance ministers, said Britain was in no position to comment on the crisis as its deficit was twice the European average. He said he was ‘not in favour of being dictated to by countries that are doing worse than us’.

Leading German magazine  Der Spiegel ran a prominent feature describing Britain as the ‘diseased empire’. Rainer Brüderle, head of Mrs Merkel’s coalition partners, said: ‘Britain can’t be freeloaders in the eurozone.’ The deputy leader of Mrs Merkel’s party, Michael Meister, criticised Britain for lecturing the eurozone on what steps it should take while not actively contributing towards a solution. He also warned Mr Cameron against leaning to nationalist sentiment on the euro, saying turmoil in the single currency area would have a devastating impact on countries outside the eurozone and on London’s financial industry.

He wants Britain to have a say in the financial crisis, but he doesn’t want his country to have to pay for it. He wants to prevent a core Europe (of Germany and France) from forming,  but at the same time he is unwilling  to contribute to deeper European  integration. Great Britain is lacking a  constructive approach. That’s why the government in London shouldn’t be surprised that it is hearing an increasing number of European countries sigh words like: Things would be a lot easier if we didn’t have the Brits.

Britain is fighting for its future in Europe more vigorously than it has in a long time. The Continent, from which Britain always tried to keep its distance, is unmistakably heading toward a future of more integration, right in front of Albion’s front door. Cameron is constantly talking of “repatriating” powers back to the United Kingdom from Brussels. Does he have nothing else to say about the future of Europe than the constant mantra of a Little Englander? Does he not know about the new treaty negotiations that would be necessary in such a case at a time when Europe has bigger things to worry about than the concerns of British euroskeptics?

Why should the Chancellor worry just now about the British who have so little to offer? If Cameron strews sand into the German efforts toward EU reform, the 17 eurozone countries will do it themselves. But Germany remembers more than Frenchmen the complicated outsider role of the British and their meaning in European history. Would it be intelligent to marginalise it, to do without its weight with regard to foreign policy? How would it stand without its defence capabilities? Would there be a domestic market without it today?’

When will it finally be crunch week for the E.U, ECB and the Euro?
The disagreements and calculations on just how much the Eurozone must find are as bizarre as the overall management of the crisis. Is it €3 trillion to pay for the sovereign debt “haircuts” and bank losses? Certain sources suggest it’s only €2 trillion and others €6 trillion. It’s such a large number it won’t be found by borrowing or creating a special fund. There’s only one ‘solution’; ignore the fear of ‘hyper inflation’ and allow the ECB to print therefore underpinning Eurozone bonds, including Italy and Spain, whose predicaments are too big to save by conventional means, we really has reached that desperation point, the choice is that black or white.

Sarkozy is arguing that the ECB must be allowed to deal with the bank problems by supplying the funds as necessary. French banks are insolvent, it’s not possible for France to bail them out and remain an AAA-rated country. If France loses its AAA rating, the EFSF debt rating is meaningless and non investable as the fund will be downgraded. If the ECB does not backstop the banks and Italian and Spanish debt, the Eurozone will fall into a deflationary debt spiral. The large majority of European banks are insolvent. They have too much sovereign debt at leverages up to 40 to 1, a write-down of 10% wipes out their capital. It would be an unmitigated disaster.

Allowing banks and sovereign governments to default at the scale considered means Europe would be plunged into a depression, the value of the euro would plummet as a consequence. Whatever Europe does, by final agreement between Germany and France, Europe is in for unimaginable pain. Recession is certain, a depression probable. Germany ‘allowing’ the ECB to print is not a foregone conclusion.

Early market news as of 0.30 am GMT (UK)
Futures on the Standard & Poor’s 500 Index expiring in December dropped 0.7 percent to 1,205.50 at 8:02 a.m. Tokyo time. The benchmark gauge for American equity lost 3.8 percent last week, the biggest retreat in two months, as Spanish, French and Italian bond yields rose and Fitch Ratings said Europe’s debt crisis poses a threat to American banks. The SPX equity index future is down 0.74% the UK FTSE future is down 0.8%.

Currencies
The European single currency came under heavy selling pressure against the U.S. dollar last week, dipping to a fresh monthly low of 1.3420 before Friday’s slight bounce to close the week at 1.3513, losing around 240 pips, or 2.0% on the week. There were no major developments over the weekend, enabling EUR/USD to open the Asian morning in the 1.3510 price zone, in virtually the same place it closed on Friday.

The Australian dollar opened the week with a near 20-pip downside gap starting price of 0.9993, down from Friday’s 1.0011 close as markets remain cautious of European debt woes and as U.S. politicians struggle to work out a budget deal. The Aussie fell circa 3.5 percent last week on fears the euro zone debt crisis could spiral out of control as the bond market turmoil spreads across Europe. Investors have chosen to sell risk-linked assets as a proxy for the euro which include the Australian dollar.

« Can A Two Speed Europe Be The Route Forward, Or Will The Divisions Render It Unworkable? What Happens In The Post Apocalyptic Financial Nuclear Winter If The Euro Currency Collapses? »