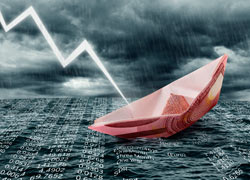 The €2 Trillion Eurozone Bail Out Fund is Born

So that’s it, the debate is over, the bunting can be put up, street parties can be held in every street throughout Europe as ‘D’ day is with us, the bail out fund lives and we can all breathe a little easier. Other than Bloomberg copy writers obviously, who’ll now have to find someone else to blame for the continued global economic malaise, unless of course they now blame the continual slowdown on the €2 trillion fund..damn..they will won’t they?

France and Germany, the two leading economies in the seventeen nations that adopted the euro and as such the leading brokers, have apparently reached an agreement to boost the eurozone’s rescue fund to €2 trillion as part of a “comprehensive plan” to finally resolve the sovereign debt crisis. This weekend’s summit should ratify the agreement EU diplomats stated on Tuesday evening. Perhaps the final push came from an outlier source; the warning by the ratings agency Moody’s, that it might review France’s coveted AAA rating because of the cost of bailing out its banks and other members of the eurozone, appears to have given Sarkozy and Merkel an added incentive.

However, Moody’s did cut Spain’s sovereign ratings by two notches on Tuesday, saying high levels of debt in the banking and corporate sectors leave the country vulnerable to funding stress. Worsening growth prospects for the euro zone makes it more challenging for Spain to reach its ambitious fiscal targets, the ratings agency added and Spain could be downgraded again if the euro zone debt crisis escalates further, Moody’s warned.

Since placing Spain’s ratings under review in late July, no credible resolution of the current sovereign debt crisis has emerged, and it will in any event take time for confidence in the area’s political cohesion and growth prospects to be fully restored.

News of the ‘grand plan’ solution rallied US investors and USA markets. The Dow Jones Industrial Average rose 250 points, or 2.2%, to 11,651, after earlier falling by 101 points earlier in the day. US markets previously reacted badly to any new news from Europe given there appeared to be an irreconcilable split developing between France and Germany. Earlier in the day Goldman Sachs reported third-quarter losses of $393m, only its second loss in 12 years, and chief financial officer David Viniar said market volatility had contributed to the fall.

EU diplomats close to the talks say the Franco-German agreement includes boosting the financial firewalls for eurozone members in order to withstand the future threat of a “credit event” or sovereign debt default in weaker countries, most notably Greece. This would take two forms, the main bailout fund, the European financial stability facility, will be given additional fire power enabling it to offer first-loss guarantees for bondholders. Senior diplomats say this will deliver a fivefold increase in the fund’s firepower – giving it more than €2 trillion compared with the current €440 billion lending capability. The EFSF will in effect become an insurer, thereby overcoming European Central Bank resistance to the idea of turning into a bank.

Berlin and Paris have apparently also agreed that Europe’s banks should be recapitalised to meet the 9% capital ratio that the European Banking Authority is demanding after its re-examination of the exposure levels of 60 to 70 “systemic” banks. The EBA has also marked these exposures much closer to current market values versus marking to model. The overall recapitalisation required will be closer to €100bn rather than the €200bn suggested by Christine Lagarde, IMF managing director. French and German banks can apparently meet the new capital ratio target from their own resources without recourse to state funds, or the EFSF. Other countries’ banks, however, may need financial support from the state or the EFSF.

Will the markets buy this solution, or will they quickly ‘do the math’ quickly cut through the spin and see that the real damage limitation figure is circa €2 trillion? Quite simply the real hard cash of €440 billion is potentially being leveraged to the max as each new ongoing leg of the unfolding crisis evolves. The E.U. is not keeping its enlarged fund’s power dry, using it all immediately whilst giving the impression it’s only used a fifth, clever stuff, or is it? Only time will tell..

Markets
The SPX rallied by 2.04% in late trade after Europe’s markets had mainly suffered falls. The FTSE closed down 0.48%, the CAC closed down 0.79% and the STOXX closed down 0.39%. the DAX broke the trend by closing up 0.31%. In terms of equity index futures the FTSE is suggesting a positive open of circa 1.3%+ the SPX is currently flat.

Currencies
The euro rallied in late trade as a consequence of the solution offered up by France and Germany having spent the previous session lower versus the dollar after Moody’s Investors Service cut Spain’s government bond ratings, fuelling concerns that the region’s debt crisis would spread. The dollar fell against the Australian and Canadian currencies as stocks and commodities rallied, damping demand for an obvious refuge. The euro appreciated 0.1 percent in New York after earlier rising 0.6 percent. The euro gained 0.1 percent to 105.56 yen. Japan’s currency was flat at 76.83 versus the dollar after advancing as much as 0.3 percent. Japan’s currency erased any gain versus the dollar after the Nikkei newspaper reported the Japanese government and central bank will oversee steps designed to address the currency’s strength.

Economic data releases for the morning of October 19th

The state of the ECB’s current account bears a significant influence on the strength of the euro. A persistent Current Account deficit may cause the euro to depreciate, reflecting the flow of euros out of the economy, whereas surpluses may lead to a natural appreciation of the euro. The UK BoE minutes are notes giving an insight into the MPC decision making process and the BoE’s opinion on economic developments inside and outside the UK. The minutes generally indicate the direction of future interest rate changes which is what markets will tend to focus on in particular.

« Thinking Like Winners to Win at Trading Psychology in Forex Trading »