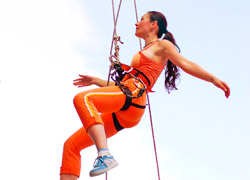 When you Reach the End of Your Rope, Tie a Knot in it and Hang On

When you reach the end of your rope, tie a knot in it and hang on – Thomas Jefferson

The president of the European Commission, Jose Manuel Barroso, set out a plan on Wednesday designed to finally bring to an end the eurozone debt crisis. Mr Barroso stated that banks must set aside more assets to help protect future losses. Banks supported by the eurozone bailout fund (the European Financial Stability Facility) should also be prohibited from paying dividends or bonuses. Euro zone countries will also ask banks to accept losses of up to fifty percent on their holdings of Greek debt as part of the plan to avert a disorderly default and stem a crisis that threatens the world economy.

Ahead of the summit of European leaders on October 23rd a “haircut” of between 30 and 50 percent for Greece’s private creditors is under consideration. That is far more than the 21 percent loss they had asked banks, pension funds and other financial institutions to accept back in July as part of a second rescue package for Greece. Barroso said on Wednesday that the bloc should take a coordinated approach to recapitalizations and only use the rescue fund, the European Financial Stability Facility (EFSF), as a last resort. He also called for a permanent rescue fund to replace the EFSF from the middle of next year instead of in 2013.

The timing of Greek tax inspectors going on strike next week, in order to protest against wage and pension cuts, couldn’t be worse as it threatens more disruption to revenue collection that is already behind budget targets imposed by international lenders. Most of Greece is also expected to be shut down by a general strike on October 19, finance ministry officials have called a two-week stoppage from October 17, tax offices will remain closed from October 17-20 and customs officials will strike from October 18-23. On Wednesday, the finance ministry in Athens was closed with a black banner reading “Occupied” on the front of the building facing the Greek parliament.

Stocks climbed in the US on Wednesday at one point erasing the Dow Jones Industrial Average’s 2011 loss, commodities gained as European leaders led by Barroso provided their five point plan to control the debt crisis. The Federal Reserve said it discussed further asset purchases to boost growth this willingness also buoyed the US market. The Dow rose 102.55 points, or 0.9%, to 11,518.85 at the close in New York. The SPX 500 Index gained 1% to 1,207.25, the highest close in almost a month, indexes in France, Germany and Italy surged by an average of circa 2.3%. The 10-year Treasury note’s yield increased six points to 2.21%, copper added 3.1% whilst the euro strengthened more than 1% versus the dollar and yen. The SPX and FTSE equity index futures are currently flat.

Economic data releases that may affect market sentiment during the London and European morning session include the following;

Economists polled in a Bloomberg survey gave a median forecast of -£4,250 million, compared with the previous figure of -£4,450 million for the total trade balance. Visible Trade Balance was predicted to be -£8,800 million from -£8,922 million previously.