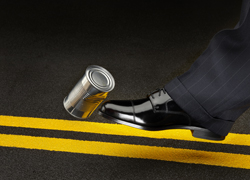 There was quite a dramatic moment in the senate committee hearing where Jack Lew took centre stage on Thursday, Democrat senator Maria Cantwell produced a graph of America’s short-term borrowing costs, showing a spike in interest rates over recent days…

She stated that people don’t realise the implications of America’s credit-worthiness being questioned, quoting an analyst “in her community” who predicted a 25% collapse on the stock market if a default looked likely. For those of us who have been saying over the last few days that what we needed was a one off massive slump, in order to concentrate the minds of the opposing parties, you wonder if it did the trick as ‘hey presto’ within hours a partial compromise appears to be in sight.

A 25% collapse would be spectacular, we were thinking 500 might concentrate the minds of the combatants in the congress, particularly given that the pre-determined market circuit breakers would no doubt kick in if the DJIA fell circa 500 pips in a single session, the massive threat of the index losing circa 4,500 points hasn’t been quoted by any analyst we can find. But anyhow, hats’ off to senator Cantwell if her pronouncement metaphorically banged a few heads together. The upside of the days hearings and the positive political maneuvering left the DJIA index up 2.18%, or 323 points, which is the largest single day rally since January, when the end of the fiscal cliff dilemma in December 2012 produced a major upswing in sentiment.

One thing is certain, Jack Lew the USA treasury secretary is earning his wages at the moment, he’s not pulling any punches and is punching his considerable weight as he sets out, in the starkest terms, the impact if a resolution is not achieved. Here’s a quick round up of the salient points he made in front of the select committee:

Jack Lew warned that the “manufactured political crisis” over the US debt ceiling and a budget for 2014, is starting to hurt the US economy, ten days after the federal government dramatically shut down. Lew told the committee that America will probably hit its borrowing limit on 17th October, and predicted irrevocable damage if America’s government were to default. Lew stated that his big fear is that the US government should stumble into a default. Lew also slammed politicians who imagine there’s more time to haggle;

“In Washington there is a parlour game of ‘When is the last minute’. You can’t do that with the debt ceiling.”

Republican senators urged Lew to consider prioritising payments, to create more flexibility. Lew dismissed the idea as politically untenable, possibly impossible in practice, and effectively a default as America would be reneging on its commitments.

Social Security claimants would be the first to suffer if America couldn’t keep borrowing, Lew cited the example of his own late mother who relied on her own cheque from the government. Anyone who thinks freezing social security payments is the answer doesn’t understand how the world works, he said. There was discussion about a short-term deal to raise the debt limit. Lew said a longer-term deal would be much better, but any deal is better than none.

We’ve continually warned readers regarding the USA DOL weekly unemployment claims, California and Nevada failed to submit their full numbers over recent weeks causing some low numbers in the prints over the last two weeks, such as 308,000. However, the surge in the number printed on Thursday was far more than the market anticipated, up 66,000 in a week. The 4-week moving average was 325,000, an increase of 20,000 from the previous week’s unrevised average of 305,000.

Now the mainstream media are apportioning the blame to the lack of info from the two states, however, this outlier print doesn’t quite wash with that excuse. It was and is a very bad number only airbrushed out of Thursday’s fundamental news due to the debt ceiling issues taking precedence.

USA markets were boosted by suggestions that a short term deal to avoid the USA enter big into default would be achieved. The DJIA closed up 2.18%, SPX up 2.18% and the NASDAQ closed up 2.26%.

The greenback climbed 0.9 percent to 98.23 yen late in New York time in the third daily gain, the longest stretch since Sept. 5th. The U.S. currency touched 98.27 yen, the highest since Oct. 1st. The dollar was little changed at $1.3524 per euro. The Japanese currency weakened 0.9 percent to 132.85 per euro. The dollar strengthened against the yen for a third day, the longest run of gains in a month, as speculation increased that U.S. lawmakers may reach a compromise to avert an unprecedented default.

The yen has lost 10 percent this year, the worst performance among 10 developed-market currencies tracked by Bloomberg’s Correlation Weighted Indices. The dollar climbed 3.1 percent, while the euro gained 5.9 percent.

The unemployment rate and the employment change for Canada are published on Friday, the rate is excepted to come in unchanged at 7.1%.

The preliminary University of Michigan sentiment index is published, the expectation is for a print of 77.2, a rise from the previous month’s figure. Derived from a survey of about 500 consumers which asks respondents to rate the relative level of current and future economic conditions it’s rated as a medium to high impact news event.

There is a continuation of the various IMF meetings on Friday, however, none rate as high impact given that they’re more of an overall observatory of current global trading conditions rather than fundamental analysis.