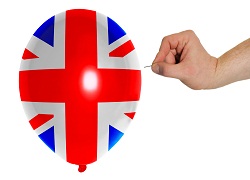 “And then I go and spoil it all by saying something like; “Brexit means Brexit”.”

For any traders within our community, caught out by sterling’s sell off versus (just about any of) its currency peers, you deserve sympathy. The UK’s unelected prime minister Theresa May, opined on UK television on Sunday afternoon that a form of hard Brexit is now the preferred strategy. Emboldened by her domestic polling lead, as a consequence of her party’s lurch to the right whilst playing the race/immigration card, her words caused the pound to collapse as markets opened on Sunday evening, sterling continued its collapse throughout most of Monday’s trading sessions.

On the subject of sympathy and if you’re licking your wounds over a loss on cable, then perhaps spare some for Japan’s richest man Tadashi Yanai who lost $1.4bn in a single day Sunday/Monday as shares in his company Uniqlo crashed, he’s still worth $17.7bn, so perhaps we can all serenade him with the world’s smallest violins.

Whilst GBP/USD didn’t plumb the depths reached by the recent October flash crash, a low of 1.2122 was within a whisker of the circa thirty one year lows witnessed three months back. Quite why the UK’s govt is allowing such careless talk is baffling. It’s so reckless you’d be forgiven for thinking certain cynical ministers went short sterling late on Friday evening, through the London based spread betting firms. And the pound is likely to drop by another 5% to $1.15 versus the dollar once Theresa May triggers Article 50 in March, as the two year countdown to leaving the EU commences, according to a Reuters’ poll of more than sixty foreign exchange strategists.

Data published by Germany on Monday was extremely bullish for the Eurozone’s leading economy and encouraged the euro higher. Industrial production has risen by 2.2% annually, trade balance was up at €22.6bn for the month of November, Germany’s current account was €24.6bn positive for November and exports were up 3.9% on the same month, smashing a forecast from economists of a 0.5% rise. Europe’s Sentix sentiment index also smashed expectations; printing at 18.2, up from 10 previously.

In the USA consumer credit data was published on Monday, the previous reading was $16.7bn, the prediction was for $18.4bn, however, the figure realised was a startling $24.53bn. $11 billion of which was credit card debt. It must be noted that this figure was for November, it doesn’t include the seasonal expenditure of the Xmas holidays. This spike in debt replacing income (USA wages in real terms have been stagnant since the 1990’s) has all the hallmarks of the 2007/2008 crises, when consumers gorged on cheap personal finance.

WTI crude slumped by 3.2% to $52.28 a barrel on Monday as an increase in U.S.A drilling neutered signs that OPEC members are maintaining their planned output cuts. Gold futures rose by circa 1% to $1,184.50 an ounce, demand generally rises up to the Chinese New Year.

15:00, currency effected USD. Wholesale Inventories (NOV). The prediction is for no change, from the previous 0.9% reading, for USA inventories.

15:00, currency effected USD. JOLTS Job Openings (NOV). The prediction is for 5517 job openings in the USA in November, from 5534 previously.