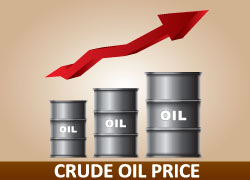 Over the past few weeks, oil prices have continued to soar as speculators use the geopolitical stress from the Islamic Nations to drive prices up. Recently, the Saudi nation has been publicly making statements that they and OPEC have increased production and that there would be no supply disruption. There words did not quell the markets.

As OPEC nations began to face the problem of a disconnect between global supply and demand they continued to try to push down the prices to counter, the Iranian threat and to stop speculators from taking huge profits. In the past few days global politicians have allowed rumours of the release of strategic reserves to surface, still having little effect on the markets.

Finally in oil prices fell on news of a huge increase in US crude inventories and France’s suggestion that it was ready to tap strategic reserves to ease high prices., crude prices have begun to fall dropping to 105.00 for Texas Crude.

The analysts surveyed by Platts expected gasoline supplies to decline 1.5 million barrels, and distillates inventories to be down 1 million barrels. The negative impact of high oil prices on the global economy has spurred speculation that the United States will resort to tapping its strategic oil reserves to boost supply.

France’s government says it is considering releasing oil from its strategic reserves as part of a US-led effort to increase supply to bring down high prices. Industry Minister Eric Besson said:

The United States asked, and France welcomed this hypothesis.

The French government is also pressing oil-producing countries to release more oil on the markets to ease prices. Like in the United States, high petrol prices have been an issue in the campaign for France’s presidential elections.

Crude prices have jumped from $75 in October to near $106 a barrel on Wednesday.

Libya expects output by the end of this year to exceed the levels of before the February 2011 uprising against Moamer Kadhafi. Before the uprising which ended Kadhafi’s regime, Libya produced 1.6 million barrels per day, of which 1.3 million bpd was exported. At the end of January, state-owned National Oil Corp said oil production had reached 1.3 million bpd. Mr Manaa said its current level of 1.45 million bpd level was the highest since the uprising. During the revolt, crude oil production came to a virtual standstill but it recovered in November to 600,000 bpd, and Tripoli said it hoped to return to pre-war levels towards the end of 2012.

With Libya, running way ahead of scheduled production, we will now see a world glut. Economists and Politicians are hoping this will help lower the price to under 100.00 to fight inflation and allow for economic recovery.