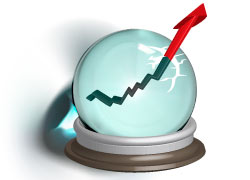 Leading Forex Forecasters Place Their Bets Predicting The Euro To Be $1.30 By 2013

So where do you see the euro ending 2012 and beginning 2013? Well here’s a surprise, despite all the doom mongering by the mainstream media when Bloomberg gathered up the predictions by the globe’s leading forecasters none of them predicted that the euro will disappear in a puff of value, at least not versus the greenback. There’s no hint of desperation from these experts who have impeccable prediction credentials.

They predict the euro to survive, the ECB and the E.U. to manage an effective recovery in the Eurozone and the currency pair to finish circa 230 pips above where the price is currently printing. So no ‘end of days’ scenario on the horizon, just more of the same as our favourite currency pair takes it’s usual twists and turns throughout 2012. One interesting aspect is the lowest and highest predictions, could these ‘extremes’ come to represent the highs and lows of the year, $1.17 – $1.45?

The most accurate foreign-exchange forecasters are predicting that the euro will once again depreciate versus the dollar for a third straight year, equaling the longest slump for the seventeen nation shared currency since its creation in 1999. The euro has depreciated by 3.2 percent in 2011 and 6.5 percent in 2010, and was the worst performing currency of 2011 versus nine developed-nation counterparts as tracked by the Bloomberg Correlation-Weighted Indexes.

The 17-nation currency lost 2 percent after erasing a gain for the year as recently as November. The most-bearish forecaster sees the euro at $1.17, while the most optimistic call is for a rally to $1.45 by mid-year. The median of the 40 estimates is $1.30 by 2013.

Wells Fargo – $1.24
Nick Bennenbroek, who is the head of currency strategy at Wells Fargo & Co. topped the list for the third time in five quarters as measured by Bloomberg Rankings. He expects the euro to drop in the first six months to $1.24, from $1.2961 at the end of 2011

The European Central Bank will continue to ease aggressively in 2012 as recession approaches in Europe and the U.S. numbers remain resilient. All the fundamentals strongly argue for euro weakness.

Westpac $1.20
Westpac Banking Corp. have the second-lowest margin of error for two consecutive surveys, they predict $1.20, as measures by the European Central Bank fail to keep the region’s sovereign-debt crisis from worsening.

Even with a euro forecast that bounced from $1.37 to $1.24 in 2011, Bennenbroek and Wells Fargo senior strategist Vassili Serebriakov’s belief in the superior U.S. growth gained them the best overall margin of error of 3.98 percent across 13 currency pairs in the six quarters ended Dec. 31.

Overseas Chinese Banking – $1.35
Oversea-Chinese Banking was the fourth-most accurate forecaster for the second consecutive quarter and had the second-lowest margin of error on the euro versus the dollar. It expects the euro to strengthen to $1.35 by the year end.

The differential between the economic performance of the U.S. and Europe will contribute to some negativity on the European currency. We also expect that the ECB will in one way or another be running looser monetary policy whereas the Fed is pretty comfortable at the moment with keeping policy where it is, so that’s another negative for the Europeans.

J P Morgan – $1.34
John Normand, the London-based global head of currency strategy at JPMorgan. Normand, expects the euro to gain to $1.34 by the end of the second quarter.

The ECB will not make a bargain explicit, but I suspect they will increase debt purchases if reform legislation is implemented. Coupled with lower interest rates the euro should stabilise, then rebound.

The euro strengthened 0.3 percent to 98.15 yen, rebounding from the lowest level since December 2000. The Dollar Index, which tracks the U.S. currency against those of six trading partners, slipped 0.4 percent, falling for the first time in four days.

The Swiss franc strengthened against 13 of its 16 major counterparts, gaining 0.6 percent versus the dollar, after Swiss National Bank Chairman Philipp Hildebrand resigned amid scrutiny over his wife’s currency trading.

There are no significant economic calendar releases that could affect the morning session.

« The French Are Saving In Euros, Whilst Britons Still Believe In Their Pension System, Both Beliefs Are Wrong Greeks Use Bailout Cash To Buy Military Hardware »