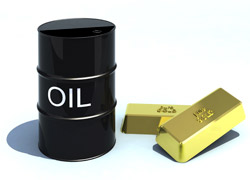 Gold may gain for a second day after better-than-forecast company earnings and signs the U.S. economy is improving drove global equities higher. Spot gold was little changed at $1,641.95 an ounce at 9:39 a.m. in Singapore after climbing 0.2 percent yesterday as the dollar dropped to a three-week low against a six currency basket including the euro.

June-delivery bullion was little changed at $1,642.40 an ounce on the Comex in New York. New homes in the U.S. were sold at a 328,000 annual rate in March, Commerce Department data showed yesterday, beating the 319,000 pace forecast in a Bloomberg News survey.

The dollar held a drop versus the euro before Federal Reserve policy makers conclude a two-day gathering. The Federal Open Market Committee will release forecasts for interest rates, growth, inflation and unemployment later today. Spot silver, this year’s best-performing precious metal, was little changed at $30.845 an ounce. Cash platinum climbed 0.2 percent to $1,547.75 an ounce, rebounding from its drop to a three-month low yesterday.

Oil traded near the highest level in a week in New York after the American Petroleum Institute said crude inventories fell in the U.S., the world’s biggest consumer of the commodity. Futures were little changed after rising 0.4 percent yesterday. U.S. stockpiles decreased by 985,000 barrels last week, the industry-funded API said. An Energy Department report today is forecast to show a gain of 2.8 million barrels.

The contract rose 44 cents to $103.55 yesterday, the highest close since April 17. Front-month prices are 5 percent higher this year. Brent oil for June settlement rose 19 cents to $118.35 a barrel on the London-based ICE Futures Europe exchange. The European benchmark contract was at a premium of $14.60 to New York futures, compared with $14.61 yesterday.

Oil’s advance in New York may stall as futures remain in a technical downtrend, according to data compiled by Bloomberg. On the daily chart, the top of a downward-sloping channel going back about two months is $104.38 a barrel today and represents technical resistance, where sell orders tend to be clustered.