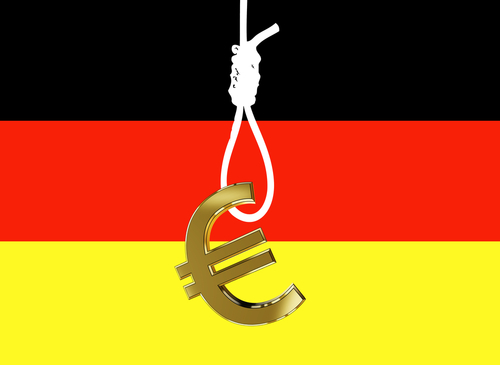 Negative forex news continued to impact on the euro, causing it to weaken against the dollar during Tuesday’s trading session. The latest bit of bad news for the euro zone was the announcement that Germany’s Market PMI (purchasing managers’ index) fell to 47.3 in July from 48.1 the previous month. The PMI is a measure of the private sector economy based on surveys of selected private corporations, and a result below 50 is an indicator that the private sector is shrinking. Analysts noted that the reduction indicated that the private sector was shrinking at a faster rate than previously recorded.

The negative forex news was just the latest in a series of bad economic developments for Europe’s largest economy, which indicate that the country may fall into recession later in 2012. Moody’s Investor Service had previously downgraded the outlooks for Germany’s AAA credit to negative, citing concerns over Europe’s growing debt crisis. In addition, analysts also expected the country’s Gross Domestic Product, a measure of output in the domestic economy, to fall by 0.1% in the second quarter with the PMI foreshadowing a further decline in the third quarter. Moody’s similarly downgraded the outlooks for the Netherlands and Luxembourg, due to increased risks that Greece may leave the euro zone and Spain and Italy may seek a Greek-style bailout, forcing the higher-rated euro zone nations to shoulder the burden.

The euro fell 0.1% to $1.2106 on July 24 trading following a session-high rate of $1.2138 following the release of data showing that the China manufacturing sector has grown at its fastest rate in nine months. The euro had touched a two year low of $1.2067 on news that the interest rates on Spain’s 10-year government bonds reached a peak 7.5%, its highest level since the euro was established in 1999. Many analysts believe that Spain’s increasing borrowing costs could eventually cause it to be shut out of the debt markets, forcing it to seek a bailout similar to the one that was extended to Greece in 2010.

Meanwhile, the French economy was also beset by bad forex news. While France’s Market PMI rating rose to 48 in July from 47.3 in the previous month, activity in its manufacturing sector fell to 43.6. But the weakness in the manufacturing sector was compensated for somewhat by a positive reading for the services sector, which had a PMI rating of 50.3. However, analysts said that economic conditions in the country remained fragile, as jobs continued to be shed in July at the highest rates for the past two and a half years. Analysts said that they anticipated that France’s GDP would shrink by 0.4% in the third quarter after falling by an estimated 0.6% in the previous quarter.

Overall, the euro zone region itself is seen to fall into a deep recession, as its PMI index hit 46.4, the sixth consecutive month it had shrank. The latest forex news indicates that the GDP of the euro zone may decline by 1% in 2012, with a worse outlook expected in 2013, which may lead to an intensification of the European debt crisis.