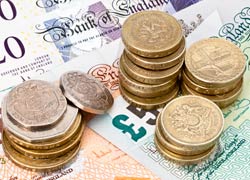 With the exception of France no other country’s top politicians have attempted to jealousy guard and protect their highest credit rating more than the United Kingdom. However, despite the UK chancellor’s best efforts to displace attention away from the UK’s precarious financial position, the hidden depths of the UK’s indebtedness now appears to be exposed. With a combined debt versus GDP in excess of 900% the UK has been variously described as the true sick man of Europe and a ticking time bomb. What is for sure is that the UK has escaped scrutiny for far too long, that avoidance is now history..

The uncertainty over the euro area’s prospects for institutional reform of its fiscal and economic framework and the resources that will be made available to deal with the crisis, are among the main drivers of the downgrades. Europe’s increasingly weak macroeconomic prospects, which threaten the implementation of domestic austerity programs and the structural reforms that are needed to promote competitiveness are also factors. These factors will continue to affect market confidence, which is likely to remain fragile, with a high potential for further shocks to funding conditions for stressed sovereigns and banks.

Fitch and Standard and Poor’s
Ratings agencies Fitch lowered its ratings on four big Spanish banks while Standard & Poor’s cut its rating for the industry as a whole on Monday following recent sovereign downgrades and on concerns of funding difficulties and a weak economy.

We believe investor confidence remains fragile and anticipate further episodes of illiquidity and volatility in the funding markets over the medium term, the agency said in an investors note. In our opinion, the Spanish banking system is vulnerable to turbulent capital markets because it relies to a degree on foreign funding.

The Greek parliament’s backing is a crucial step forward toward the adoption of the second program. I’m confident that the other conditions, including for instance the identification of the concrete measures of 325 million euros ($430 million), will be completed by the next meeting of finance ministers.

It’s important for now to complete this program and the passage in the Greek parliament yesterday was very important. The finance ministers will meet again on Wednesday to undertake the work on this, but there can’t and the won’t be any changes to the program.

USA
Barack Obama has called for new spending initiatives in order to boost growth and increased taxes on the rich, providing an election-year vision for the USA in a budget that drew criticism from Republicans for not curbing the deficits. The $3.8 trillion budget proposal is a “reflection of shared responsibilities,” the president said at a campaign-style event in Annandale, Virginia, referring to his call for a minimum 30 percent tax on millionaires.

Obama wants to use revenue from the “Buffet Rule,” named after billionaire investor Warren Buffett, to replace the Alternative Minimum Tax, aimed at ensuring the wealthy pay at least some tax but is now catching many middle class taxpayers. Obama called for more than $800 billion for job creation and infrastructure investment, including billions of dollars for roads, railways and schools. Analysts were skeptical of the proposals.

Forex Spot-Lite
The yen gained versus most of its major peers after Moody’s Investors Service cut ratings for nations including Italy, Spain and Portugal and revised France’s and the UK’s outlook to “negative,” boosting demand for haven assets.

The pound weakened after the credit assessor also revised its outlook on the U.K.’s top Aaa grade to “negative.” The euro maintained two days of falls before finance ministers from the region’s 17 nations meet tomorrow to discuss a second aid package for Greece, following the nation’s approval of austerity measures.