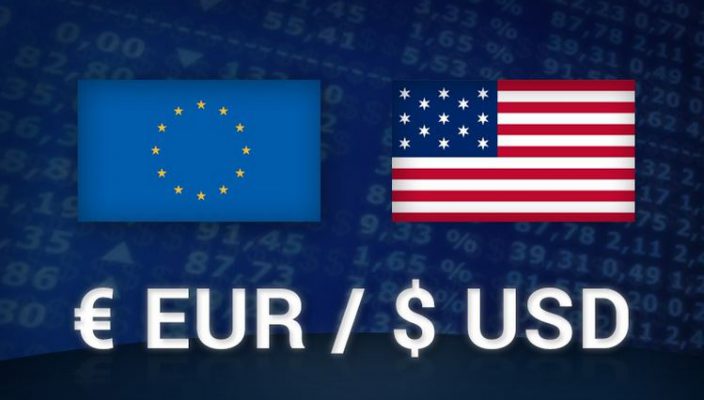 The EUR/USD price loses altitude after reaching the 1.1231 level. The currency pair opened the day with a huge gap down. The price tried to close it, but the sellers are still strong, signaling a potential deeper drop. As you already know, the US economic data came in better than expected on Friday. Still, geopolitical tensions have a big impact on the financial markets. Today, the Spanish Flash CPI rose by 7.4% exceeding 7.1% estimates.

On the other hand, the US Goods Trade Balance was reported at -107.6B, far below -99.6B expected and compared to -100.5B in the previous reporting period. The US data came in mixed as the Prelim Wholesale Inventories rose by 0.8% compared to 1.3% forecasts which are good for the USD. Later, the Chicago PMI could bring more action. The economic indicator could drop from 65.2 to 62.1 points.

The Dollar Index dropped, but this could be only a temporary drop. DXY could try to retest the descending pitchfork’s upper median line (UML) before turning to the upside again. A temporary retreat was expected after the previous swing higher in the short term. Technically, the correction seems over. The upper median line (UML) and the weekly pivot point of 96.65 represent downside obstacles.

The EUR/USD pair found support on the 1.1121 and the descending pitchfork’s median line (ml) and is now fighting hard to close the gap down. The next major upside obstacle is represented by the weekly pivot point of 1.1256. If the rate fails to close the gap, the bias remains bearish. Actually, the rebound could be only a temporary one. The EUR/USD pair could drop again if it stays below the downtrend line. A short-term sideways movement could announce a new distribution pattern. Still, only a false breakout above the immediate resistance levels.

« What is a forex trendline breakout strategy? Price Analysis of GBP/USD: Retakes Mark 1.3400 to Move towards Channel Resistance »