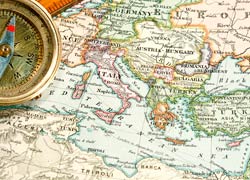 Italian writer and politician Giuseppe Mazzini called for the creation of a federation of European republics in 1843. This set the stage for perhaps the best known early proposal for peaceful unification, through cooperation and equality of membership, made by the pacifist Victor Hugo in 1847. Hugo used the term ‘United States of Europe’ (États-Unis d’Europe) during a speech at the International Peace Congress, organised by Mazzini, held in Paris in 1849.

Hugo favoured the creation of;

However, he was laughed out of the hall, yet returned to his idea again in 1851. Victor Hugo planted a tree in the grounds of his residence on the Island of Guernsey he was noted in saying that when this tree matured the United States of Europe would have come into being. This tree to this day is still growing happily in the gardens of Maison de Hauteville, St. Peter Port, Guernsey, Victor Hugo’s residence during his exile from France…

The global financial collapse of 2008-2009 left many economists shattered, in some respects many never fully recovered their equilibrium, their confidence and moreover their trust in the system. I’m not alone in predicting the current malaise the Eurozone finds itself in, I’ve anticipated the sovereign debt crisis since 2009. However, iconoclastic views and voices have been buried in the media since 2008/2009 as the new normal evolved. House prices didn’t collapse in all countries, unemployment didn’t spike massively, inflation didn’t ravage through the developed economies, the situation looked contained.

It was patently obvious at the time of the collapse that the various crude mechanisms put in place by the elite politicians and bankers in order to preserve the incredible wealth of the few, by sacrificing the financial security of the many, had a decaying atomic half life. Whilst many market analysts have recently looked for the new ‘Lehman’ event horizon this column did suggest in September and October that a Lehman comparison was deeply flawed. To compare a banking crisis with a sovereign debt crisis, which may ultimately see the failure of the most peaceful unification process witnessed in modern times, was invalid. We referred to the possibility of an ‘outlier event’ that might render comparisons to Lehman as redundant, what we’ve witnessed over recent days would confirms our summation was correct.

The first signs of a break up in a relationship generally start with petty squabbles, Italy, France, Greece and Germany, the principle protagonists in this fall out, are beginning to plan for a new future whilst broadcasting that they’re pre-occupied with their responsibility to put the domestic interests of their fellow countrymen first. When you consider how carefully the public relations has been managed during the crises, how the Merkozy alliance has been constantly ‘on message’ over the past year, this current lack of coherent strategy suggests the break up is beyond make up and any attempts to limit the bad public relations collateral damage is now regarded as pointless. Greece can’t agree a new government, given the visceral hatred between the two main parties it was never a workable solution. Italy’s government is at tipping point and reports were emerging from Brussels on Wednesday evening suggesting that Germany and France had begun preliminary talks on a break-up of the eurozone, amid fears that Italy will be too big to rescue.

Senior policymakers in Paris, Berlin and Brussels are reported to have discussed the possibility of one or more countries leaving the eurozone, while the remaining core pushes on toward deeper economic integration, including tax and fiscal policy. “France and Germany have had intense consultations on this issue over the last months, at all levels,” a senior EU official in Brussels told Reuters, speaking on condition of anonymity because of the sensitivity of the discussions. We’re past discussions on ‘orderly defaults”, this appears to be a scramble for the exit doors whilst one or two fall through the trap door.

Australian shares have declined in early trade by the most in almost two months, Japanese stocks slumped and the euro weakened to a two-week low against the yen amid concern Europe will struggle to keep its currency union intact and before a sale of Italian treasury bills.

The median estimate of analysts surveyed by Bloomberg is that the UK base rate will remain unchanged at 0.5%.